Dragging drama: Too close for comfort

Although we have had boats drag into us on a few different occasions, we have managed to escape without injury to person or property. One particular bit of drama that we have fortunately been able to avoid is having another vessel get their anchor caught up in our rode. That situation particularly complicates dragging, as it runs the risk of setting both boats adrift. It is, as a matter of fact, the exact scenario that we got to witness yesterday, and in my opinion, the whole thing happened a bit too close to our boat for comfort.

I’m not sure why I popped up on deck yesterday morning. There wasn’t any loud yelling that I could make out, nor did I hear the sound of chain dropping, the noise that tends to draw cruisers around the world up from below (visualize a gopher popping his head out of his hole). Regardless of why I was lured outside, when I got to the cockpit, I was greeted by the sight of a catamaran that was far closer to us than it should have been. 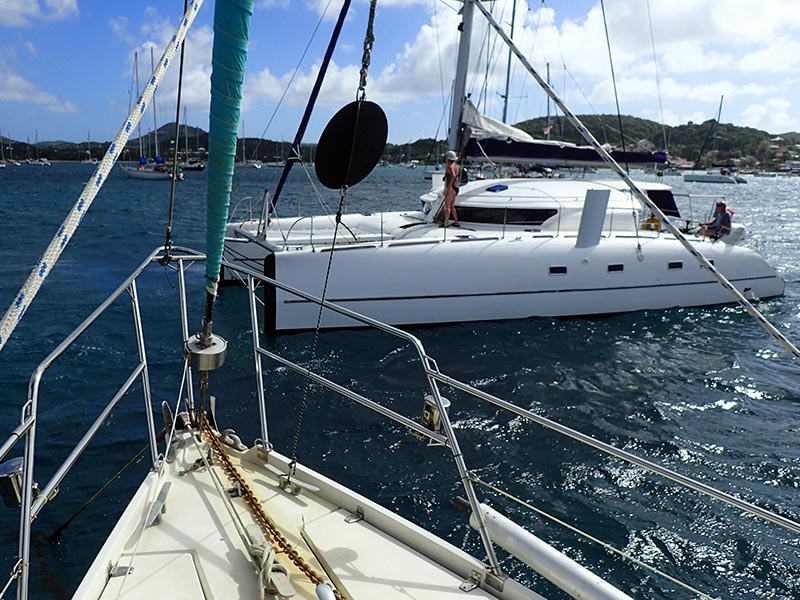 Not what you want to see when you come up on deck!

I could see a woman on the bow of the cat, and a man at the port-aft helm. When he glanced in my direction, I extended my arms out to the sides in my best WTF gesture. He promptly started the boat moving forward, rapidly I should add, drawing in anchor chain as he went. I initially assumed that he’d simply lost his mind and had attempted to anchor where there wasn’t space. The situation turned out to be nowhere near that easy to remedy. 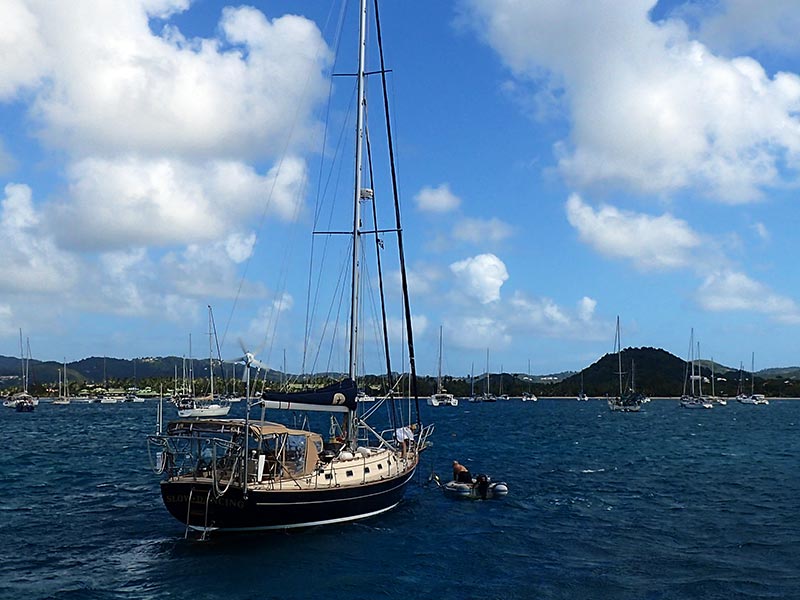 Apparently something is wrong.

With the cat moving away from us, I was then free to take in more of the big picture. I could see that the monohull that had been anchored off our port bow was now significantly closer to us than it had been when we’d gone to bed. I could also see the captain of that boat, in his dinghy, alongside his bow, fiddling with his anchor chain. With the catamaran now motoring directly at that boat, once again, rapidly, it became apparent what was going on. I wasn’t, at the time, sure how it had all unfolded, but it was obvious then that the two boats had their chains caught around one another. Not good, especially if they started dragging into us, or got their anchors wrapped up in our chain! 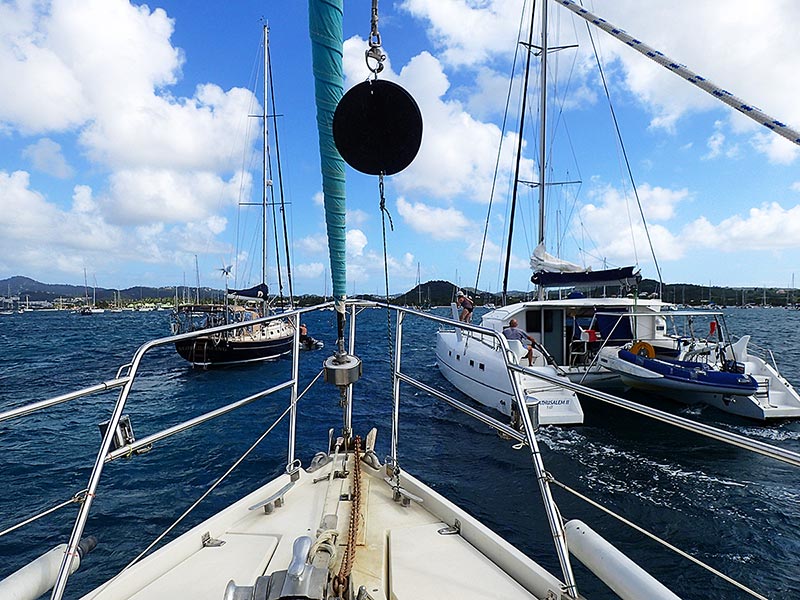 To judge the speed of the cat, take note of the prop wash.

By this time Rebecca was aware of the drama, and she was beside me in the cockpit. Anticipating that we might have to fend off one or both of the boats, and also to get a better view of the situation as it unfolded, we moved forward to Frost’s bow. At my request, Rebecca popped back down below to retrieve our camera, and when she returned, I started recording the situation (pics and video are as good for insurance claims as they are for blog posts). 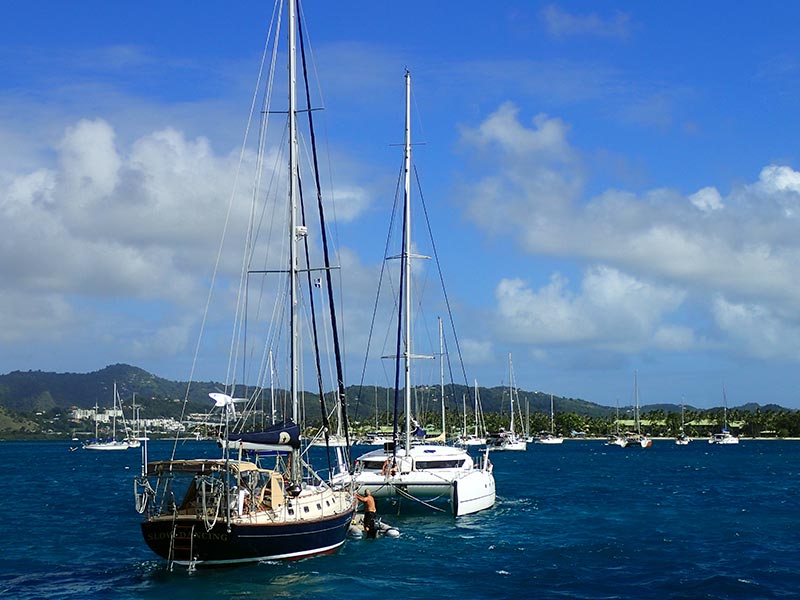 Not a situation you want to find yourself in!

Given the chance, we might have tried to raise our anchor and remove ourselves from the situation. Unfortunately, at the time most of the craziness was going on, the boats were right overtop of where we believed our anchor to be. We also would have been the first ones there in our dinghy to lend a hand if there hadn’t been the risk of both of those boats dragging down into us. With no ability to raise our anchor, and unwilling to leave our boat in case we were needed there, we sat there watching the crew of the monohull do their best to free the cat’s anchor from their chain. 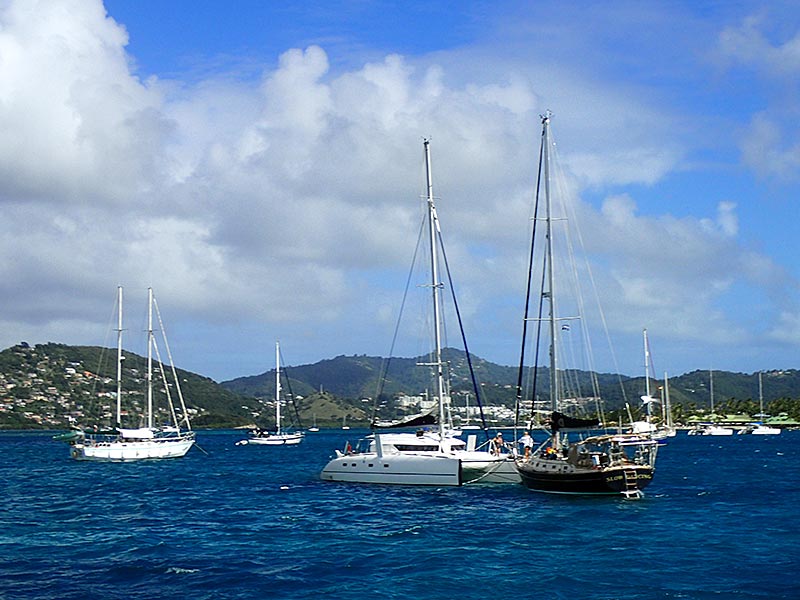 The danger is that the monohull’s anchor could become dislodged, setting both boats adrift.

I can appreciate that situations like this are very tough, so I don’t want to be too judgmental of what went on, having only observed it from the relative safety of our bow. That said, the crew of the cat were not making things easy! There is a saying in boating, “Slow is Pro.” Apparently the captain had never heard that phrase before. I was actually quite concerned for the safety of the guys in the dinghies at a few times as the chain kept being drawn up tight by the super-fast reversing of the cat (a second person had, by then, shown up on scene to help). When the cat wasn’t going backwards abruptly, it was going forward too quickly, one time actually T-boning the monohull. I won’t say any more. You can watch the video to decide if what I wrote is fair.

The Trouble with Tillers*

Our boat must have room for…