Don’t try this at home (or on your boat)!

Last Thursday we posted a video of Rebecca mixing up one of our favorite cocktails, the Bloody Brutus. But filming that wasn’t enough for Carl. No, he wanted to shoot a second drink video only this time, it was late in the evening following our long tour around the island. The following carnage, filmed at Roger’s Beach Bar on Hog Island, is what became of that.

“If you’re not crying laughing after watching this you’re not a fun person.”

Don’t try that at home, kids. Even Roger walked away so that he wouldn’t have to witness it! 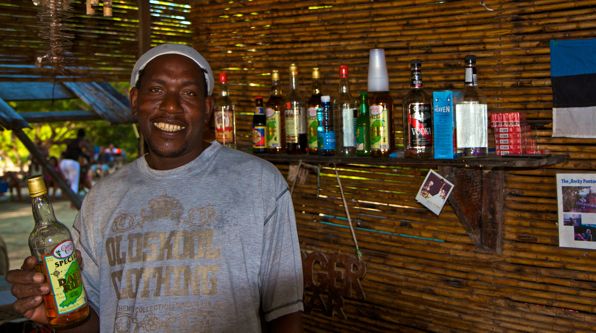 This awesome photo of Roger, behind his bar, was taken by Carl Grooms.

Note: The snifters should ideally be able to balance on top of the tumblers in the orientation shown in the video. They also need to be large enough so that the Sambuca does not pour all over the counter when balancing in this position (as it did on the video)!

Set up: Place the napkins on the edge of the table, one on each side of you. The straws are placed on top of the napkins, extending a bit off the table.

Perform the shot as shown in “take 2” on the video. After the flaming Sambuca is poured into the tumblers and extinguished by placing the snifters upside down into them, the glasses should be placed upside down on top of the straws/napkins. After the shot is quickly downed, the drinkers bend down to the straws and inhale the alcohol fumes which are trapped in the upside down snifters.

*A coffee bean can be placed inside each of the glasses of Sambuca before they are lit.

Yet another thing I need to have tattooed on myself.