Yesterday’s post mentioned the 300 feet of new anchor chain that we added to One Love. I wrote about how easy it was to get the chain on board. What I neglected to mention that I was so caught up in how well that was working that I didn’t connect the bitter end of the chain to the boat. I only realized my mistake when that end of the chain was buried under the huge pile. Doh! A mental note was made to rectify that at the first opportunity. That opportunity came yesterday afternoon.

After the conclusion of the charter show, which went fantastic by the way, Rebecca, Michael and I were eager to get off the dock. We cast off our lines and then motored the short distance from Yacht Haven Grand Marina through Haulover Cut to Elephant Bay. This anchorage is chock full of private mooring balls so it is a bit tricky to find a good place to anchor. We managed to find a spot between a couple of vacant balls that we figured would be adequate for the night as long as no boats came to use them (of course, one did later in the evening).

After rigging our bridle and settling in we proceeded to lower the majority of the remaining chain into the water so that I could retrieve the unconnected bitter end. Once I was able to take hold of it I set about splicing a short (25′) length of line to the chain so that I could tie it to the boat. Although it would have been easier to simply shackle the chain to the U-bolt in the anchor locker, I prefer to have the rode tied to the boat so that in the event of some drama where we’d have to let our anchor go, the line can simply be cut, a process which would be much faster than fumbling with a potentially rusty shackle.

Although it’s been some time since I have done that splice, it turned out well IMO. Once I had the line tied to the boat I will admit that I felt much better about the situation. We could have called it quits right then but we still had one more issue to deal with – we needed to mark our anchor rode. That again would have been easier to do before we loaded it all onto the boat but with all the work that was going on prepping for the show, I didn’t want to invest the time in looking after it.

With the three of us working together, we came up with a system of bringing the rode up in 4′ segments, marking the chain with a sharpie marker and then at each 25′ length, branding the chain with colorful tie wraps. As the anchorage was calm, we were able to get all but the first three marks (25′, 50′ and 75′) on the chain. Perhaps we’ll get to that as we bring our anchor up later this morning. 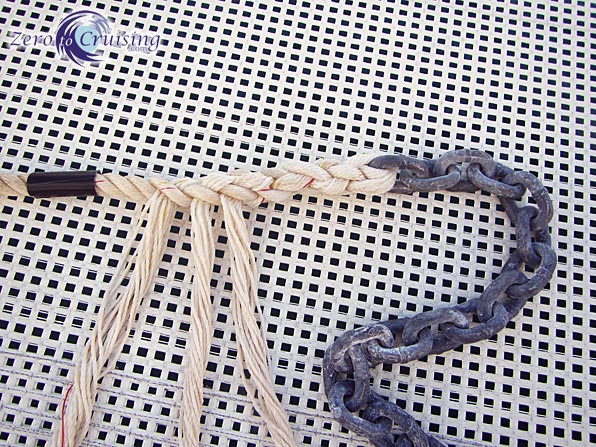 Note: Why fasten the bitter end of the anchor rode to the boat? As I relayed the details of our day’s work to a cruising friend of ours last evening, a friend who shall remain nameless, she shared the story of a time when she (and her husband) accidentally let their anchor and all of their chain run off the boat. Oops! It happens.