We meet some very interesting people in our travels. Adjacent to us on the dock the other day were a couple of large sport fish boats from Trinidad and the owner of one of them happened to be a successful dealer for a popular brand of marine engines. After Michael struck up a conversation with him, he invited us on board his yacht and at our request, proceeded to share some info on engines. I was especially interested in his views on fuel management.

Our new friend told us that his boat carries 1700 gallons of diesel, a tad more than the 180 gallons that we carry on the Leopard. While touring his engine room, he showed us the two very large engines that power his boat (I forget the horsepower) and the big gen set that he runs 24/7 to operate his boat’s systems. Anyway, the point is, he goes through a lot of diesel!

So what did he have to say about fuel? Simply that, in the Caribbean, we are dealing with a fuel management problem as many times the fuel that we purchase is not very clean. That I knew! He also stated that, in his opinion, it doesn’t matter what the fuel is like in your tanks. Rather, the only thing that matters is how clean the fuel is that gets to your engines. That made a lot of sense to me. He shared that while many of his boating friends are stuck in the engine rooms making repairs, he is drinking rum and enjoying life. That made even more sense to me. 🙂 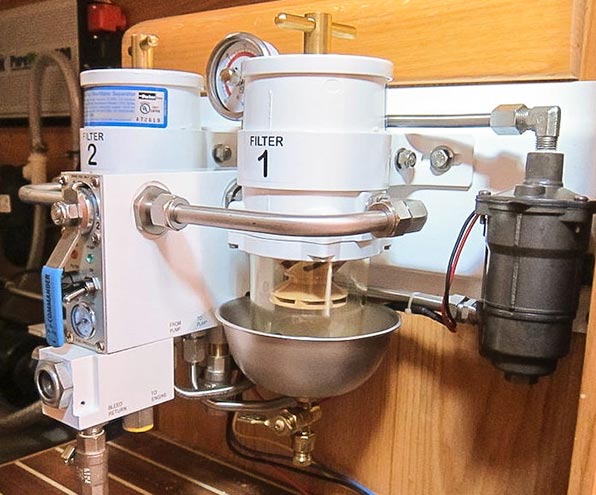 To manage the fuel on his boat he had the diesel running through two separate dual Racor filter systems with vacuum gauges (similar to a Filter Boss — one dual system for each engine). He also had a fuel polisher which he ran (I can’t remember how often or long he ran that). What he recommended to us though, in addition to the dual Racor setup, was an item he called a centrifuge (here is one particular brand that I found during a Google search). While he did not have one of these installed on his boat because he has that polisher, his buddy, who was also part of this conversation, did. They both said that they have friends who have had very good success with these relatively new units. Apparently they are installed just before the primary Racor filters and have no replaceable parts. I’m curious to hear if any of our readers have experience which such a thing.