I am working under the assumption that you have a boss that you need to report to and I also assume that he/she would like for you to operate your bridge as efficiently as possible, minimizing the time that it is open and thus traffic on the road crossing it is stopped. I hope that perhaps with this letter I could influence you to adjust your methods for doing so a bit so as to increase safety. Specifically I am referring to your radio tactics which “encourage” sailboats wishing to transit into moving right up to the yet-to-open bridge. Note that I use the positive word “encourage” even though I have heard the term “bully” used to describe your tactics from several other Captains.

Perhaps you have never operated a boat before. I have to guess that this is true because telling a boat to “hold position” 10 meters off a structure which could cause serious damage to it is foolish if not negligent. You may not be aware of this but getting a boat to “hold position” is not an easy thing to do, especially when it is being influenced by wind and/or current. A boat that is not moving has no steerage and one that is stopped that close to a bridge, and the shore, is in an extremely precarious position.

Case in point is our own outgoing transit of the Simpson Bay Bridge at 11:00 AM of December 27th. We were the first boat in line and following your commands, we moved closer and closer to the still-closed bridge. Perhaps from inside your enclosed booth you were not aware of the weather on that day. The wind was blowing 15-20 knots directly at the bridge with frequent gusts to 25 and above. It was the combination of this wind and the fact that I allowed you to influence me into taking our boat closer than I should have that almost put a sudden end to our cruising.

With the bridge only just beginning to open, the wind caught our stern and pushed us beam-to the bridge, with precariously little room to maneuver fore and aft. After more than 5000 miles of sailing, that is absolutely the closest we have come to having our boat wrecked and I am not ashamed to admit that for several tense moments both my wife and I were both very scared! It was only at the last second, with full throttles on both engines (we sail a catamaran), that I was able to bring the vessel around so that we could get through the bridge that you, by then, had open. Do you remember sarcastically yelling “Thank you very much” to my wife as we passed your booth? Apparently you were upset because we were so inconsiderate to have delayed the other boats behind us for a few seconds during the drama that nearly destroyed our boat!

Imagine what would have transpired had I not been able to bring our boat back under control. Our vessel would have either been pushed onto the rocks adjacent to the bridge, blocking other boats from transiting or even worse for you, smashed into the structure itself. With the bridge on the French side having now been out of service for a month, do you think that you would have been all that popular had you contributed to the Dutch bridge being damaged, blocking all access to and from the Lagoon? I don’t think so.

It’s my opinion that the few seconds that you save on each opening by attempting to force boat operators into moving closer to the bridge than is nautically prudent is false economy. By allowing, and even better, encouraging vessels to maintain a safe distance from the bridge until it is open, you are doing your part to protect property and perhaps even lives. I am quite certain that the automobile operators sitting comfortably in their cars waiting for the bridge to once again close will not even notice the difference in time. 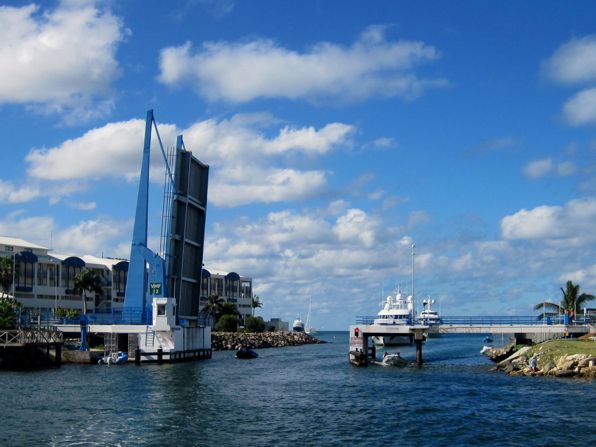 Where it all almost came to an end!

A great reason to visit Deshaies