It seems amazing to us that while out in a wide expanse of water, without any other vessels or hazards nearby, large wake-inducing powerboats feel the need to pass us within 20 feet or so. Why? I can only assume that, with nothing else to look at on the water, they are just curious about what our boat is like.

Such is not the case on the ICW though, where out of necessity, we are routinely passed at close range by upwards of a dozen or more vessels in a typical day’s travels. Powerboats, who can easily cruise at much faster speeds than sailboats, are forced to play leapfrog as they move up and down the waterway. If they blow by other vessels at their normal cruising speed though, the wake that they throw can often lead to damage and in some rare cases, even injury. Which brings us to the “slow pass.” 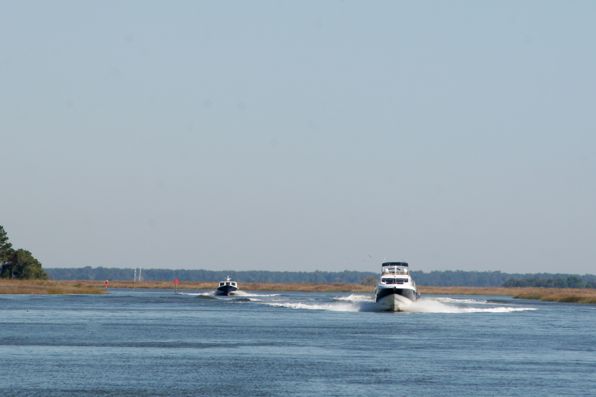 A frequent sight on the ICW. Reminds me of being chased in a James Bond movie.

Captains of vessels overtaking another will frequently radio ahead to the slower boat, making their intention to pass known and often requesting that the lead vessel slow down. If they do so, the faster boat can then cut their speed way down, minimizing the wake that they leave behind. But what side will they pass on? In many cases it is obvious but you will often hear the Captain of the overtaking vessel say that they’d like to do either a “1 whistle” or a “2 whistle” pass. With it’s roots in sound signals, what they are in effect saying is that they will adjust course to starboard or port respectively. Why not just say that then? Because it doesn’t sound as cool, that’s why! We have, thus far, only once actually experienced a vessel blowing their horn at us to indicate their intentions but at least now we are familiar enough with this to know what the sound signals mean. 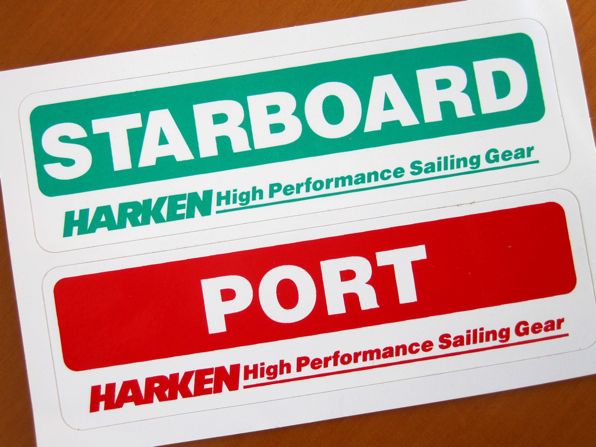 Our friend Kirk gave us this sticker. Why would anyone with “high performance” gear require a sticker to show them which side of the boat is starboard and which side is port?

Rather than trying to list all of the sound signals, I copied the following from a recent issue of the Cruising Compass newsletter:

Boat Rat’s Tip of the Week: Remember Your Sound Signals

We were out sailing last weekend when visibility in haze dropped to under half a mile. As it happened, we were in confined waters and crossing a ship channel. Out of the haze we heard two distinct horn blasts from a ship that we could not immediately see. What did that mean? According to the Rules of the Road, here’s what basic horn signals tell you and allow you to tell others out on the water when visibility is poor.

One short blast means that the approaching ship is turning to starboard; if you and the ship are converging head on, you should sound one blast and turn to starboard so the vessels pass port side to port side. If one ship is overtaking another, one blast will indicate that the overtaking ship will be passing on the starboard hand.

Two short blasts means you are turning to port. This can indicate simply that you are following a bend in the channel, that you are avoiding a hazard, or that you are overtaking another vessel and choosing to pass along the port side. Converging vessels should not pass port to port in limited visibility without verbal agreement via VHF radio.

Three short blasts means you are backing down and can mean that you are avoiding a collision, making a tight turn or even setting an anchor.

There is no signal with four even blasts, which helps maintain clarity between three and five – very different signals.

Five short blasts is the danger signal that indicates that an approaching ship has determined that danger lies in its path and is warning all vessels off its bow to keep clear. You will hear this even in broad daylight when ships pass through crowded sailing grounds on their way to port.

Battle of the underwater cameras