While some prefer the term yachties, most people would probably describe Rebecca and I as cruisers, people who travel from place to place on a boat. Our internet friends, Livia and Carol on s/v Estrellita 10b, feel that the term cruiser is a bit too restrictive and choose instead to call themselves vagabonds, opening the door for them to travel any which way they choose, by water, land or air. I do like that.

There are numerous other people, including many back in Canada, who live on the water and call a boat home, but yet never really travel anywhere. They would typically be referred to as live-aboards. For the first year that Rebecca and I owned our boat we would have lumped ourselves into that category. We worked on land, had our boat in a marina and only ever made short trips out on weekends (more than most other live-aboards to be honest). I suspect that many cruisers start out that way before officially “cutting the dock lines.” One thing that I’ve noticed though is that quite a few seem to go full circle and end up that way too!

How long does someone need to remain stationary before they move from the cruiser category into the live-aboard category? Of course, it doesn’t really matter but it’s something that I do think about. In numerous places, often hurricane harbors such as Trinidad, Grenada and Luperon (DR), we have run into people who may have initially stopped to wait out a storm season but ended up never leaving. Often they are single men but that is not always the case; we’ve seen couples and entire families too. Some have since acquired jobs on land and vehicles to get them to and fro while others continue to get by the same way they did while they were traveling. Their boats, however, while once fit for passages, are now better suited for comfort in quiet harbors.

Will Rebecca and I end up that way? Who knows. I can’t see it for us but then again, I’ve never been all that great at predicting the future. If these people have chosen to remain stationary because it makes them happier than traveling did, then kudos to them. If they’re making money so that they can continue to travel in the future, that makes sense to me too. At the present, remaining stationary for anything more than a couple of weeks starts to drive us crazy. You never know though. 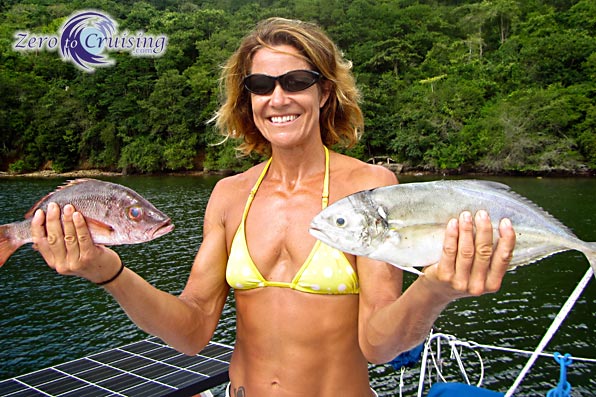 Entirely unrelated to today’s post, a kind family that were fishing on Chacachacare Island gave us these two fish for dinner the other night. How awesome is that?