Could there possibly be too many beaches?

When I first wrote about Antigua, I commented that their promotional material says that the island has 365 beaches, one for every day of the year. As someone else wrote, they may have used some creative mathematics to come up with that figure, but with that said, there’s obviously still enough beaches that Rebecca and I could mistake one for another.

For the last couple of days, the two of us have been bouncing back and forth between the Five Islands area and Jolly Harbor, right next door. Today we decided to enjoy the sunshine a bit, our intention being to head to Eden Beach on Hawks Bill Bay which, according to our chart, is right around the corner from where we are anchored. For those familiar with the area, this is Antigua’s clothing-optional beach and we were looking forward to erasing some of our tan lines.

After packing a lunch and a few cold beverages, Rebecca and I hopped in the dinghy to zip over there. By the way, I’ve mentioned in the past how important we feel it is to have a dinghy that is powerful enough to plane. The beach we were headed to was 1-2 miles away. In our current dinghy “zipping over there” is no problem. With our old 4 HP engine we likely wouldn’t have even considered it. Anyway, once we rounded the point heading out of Five Islands Bay, our only problem was that we couldn’t quite tell which beach was Eden. As it turns out, we picked an entirely different one in Pinching Bay and as luck would have it, we had this particular stretch of sand all to ourselves for the entire day! That’s right… the only visitors who happened upon us were some wild (I assume) goats, and we were happy to share with them. How cool is that, having your very own beach? 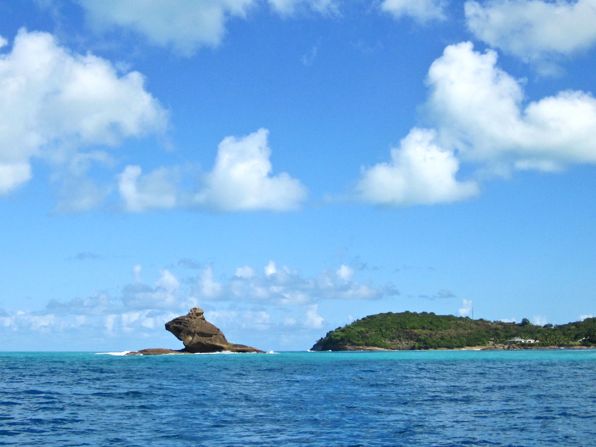 Hawk’s Bill Rock. We think it looks more like a frog than a Hawk’s Bill. 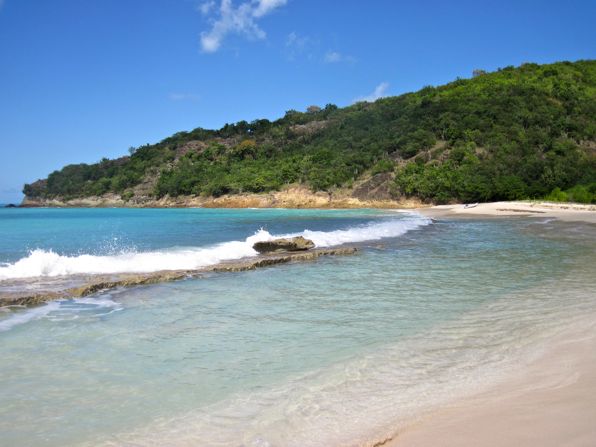 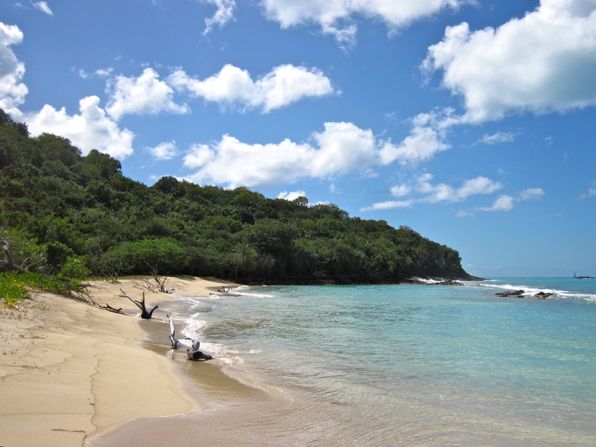 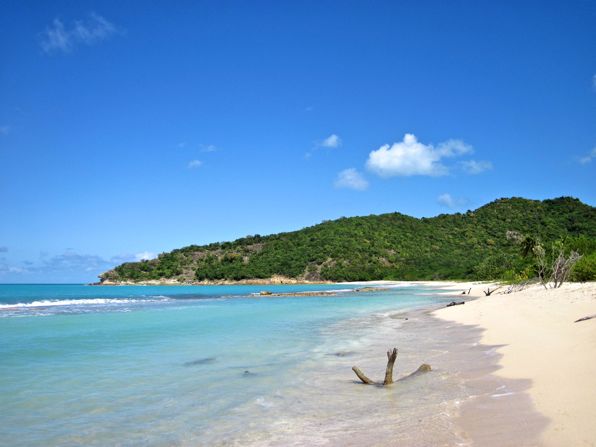 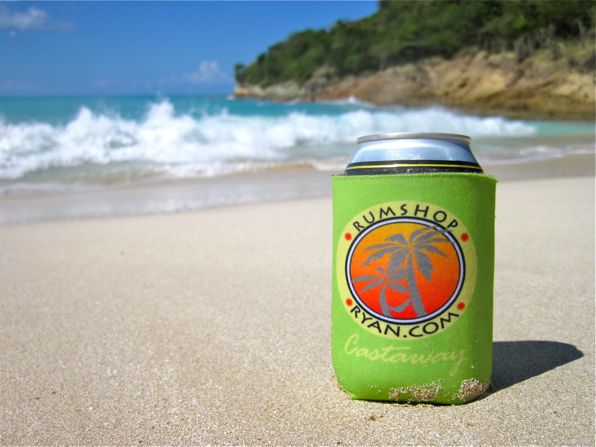 We of course had to bring along our RumShopRyan koozies to keep our drinks cold. 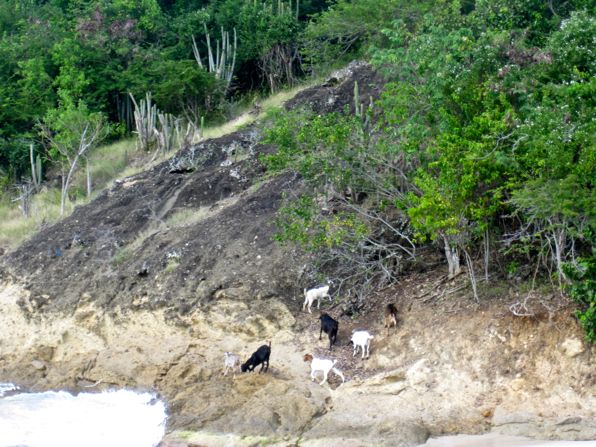 By mid-afternoon we’d had our fill of sun though, and so decided to hop back in the dinghy to do a bit more exploring. This, unfortunately, was not to be without a bit of a challenge. I’m not sure if all the readers will remember the Tom Hanks movie Castaway where a lone Fed-Ex employee is “shipwrecked” (plane wrecked actually) on a deserted island. At one point in the movie he builds himself a raft and tries to escape the island by paddling it out beyond the reef. The breaking waves have something to say about that though and end up trashing his raft, injuring him in the process.

In the above clip he actually makes it out, barely!

Although not quite to that extent, yesterday, and several other times like it, we have been faced with a similar challenge. Because there is a fairly large swell running right now, the waves breaking onto the beach were, at times, large enough to “mess us up.” At one point in the day I stopped at just the wrong spot, looking back at Rebecca on the shore. By the time she got my attention directing me to look over my shoulder, I got smashed by a wave taller than my head, flipping me end over end back to the beach. Fortunately the only casualty of that incident was my sunglasses which are now forever damned to the deep I’m afraid. It did however emphasize that we’d have to play our cards right to get out of there without flipping the dinghy. After studying the wave pattern for a considerable period of time while poised at the shoreline, Rebecca and I picked just the right moment to make a mad dash into the water, dragging the dinghy beside us, until we were just beyond the danger area. We were fortunate in that we made the whole thing look simple. It could just as easily have turned out ugly if our timing was off. 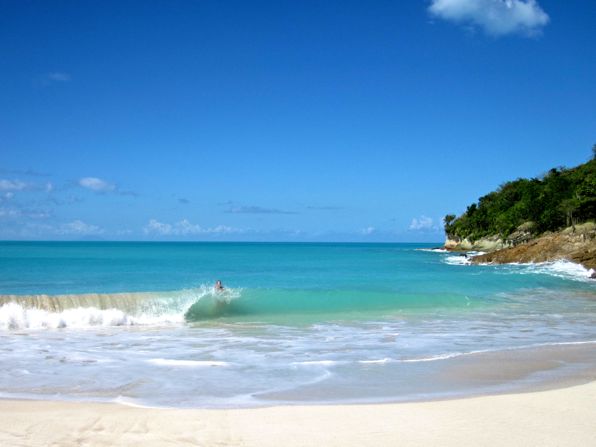 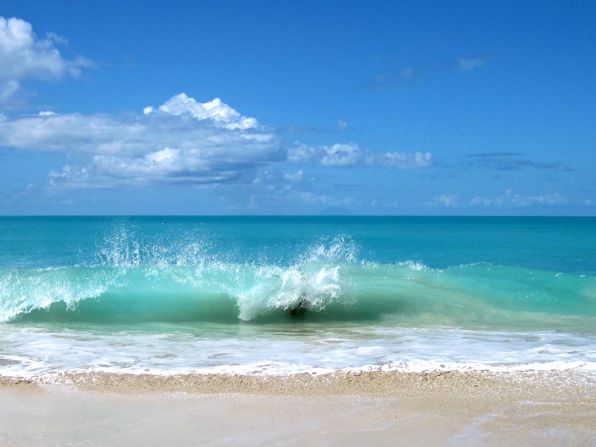 Yeah, that one hurt! 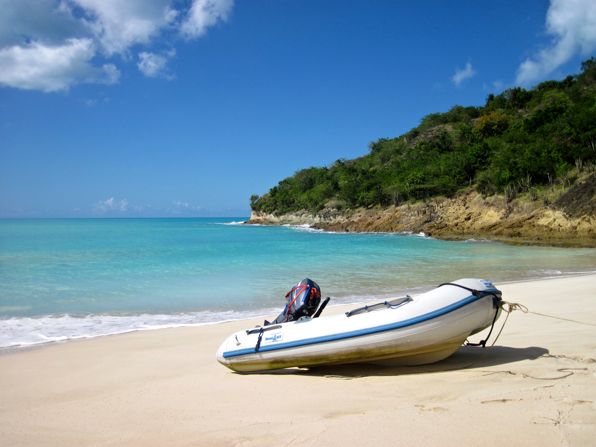 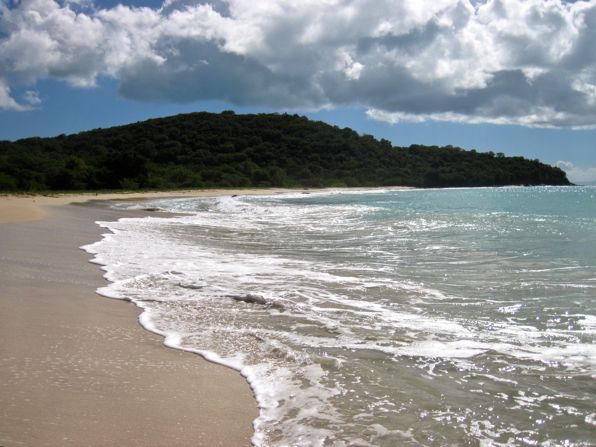 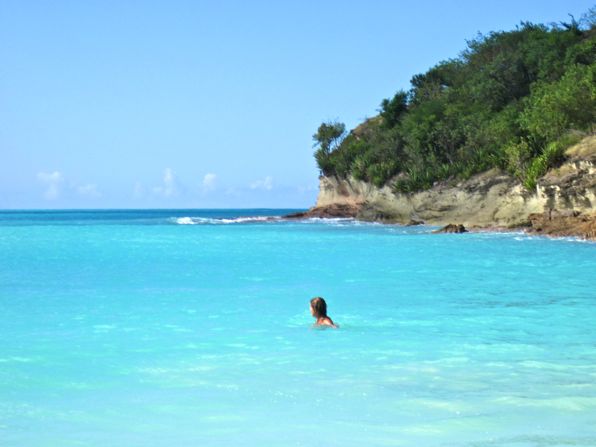 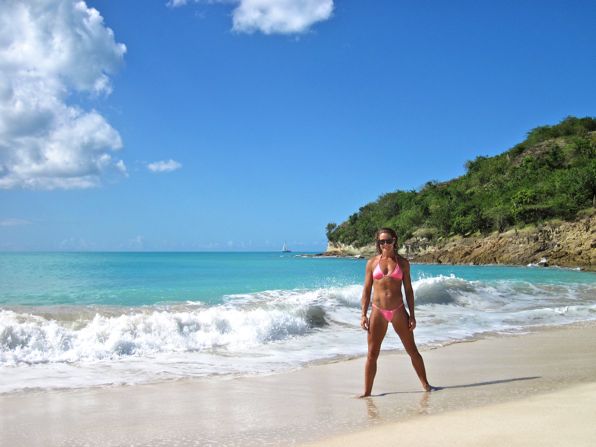 After scanning the coast a bit north of where we were, and finding the actual Eden Beach, we headed back to Five Islands Bay. In the distance we could see a tower which we have come to learn is part of the remains of an old leper colony. With a bit more daylight still remaining, Rebecca and I thought that exploring the tower might be fun. We proceeded to land our dinghy along another of the 365 beaches, this one without a huge swell, and set off on foot, searching for a trail. When one wasn’t immediately apparent, we asked a lone gentleman who was lying in the shade on the beach. As it turns out, Keatly is a local fisherman who was tending the net that he had set in front of the beach. He explained to us that there was no easy way to get to the tower from where we were but he did take us for a walk to show us why. We came to see that there is a large pond in between that beach and the ruins that we wanted to visit. After giving us a bit of a wet tour, he then proceeded to explain how we could actually go about getting there by walking on a trail beginning elsewhere. Where does the trail begin? Back on the beach we spent the day on! Oh well, I guess we’ve got another reason to go back there. 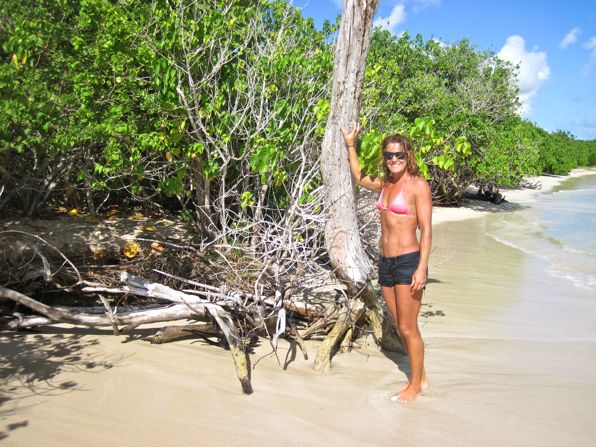 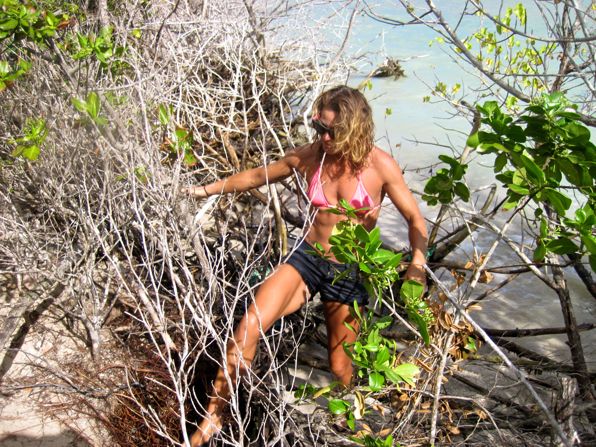 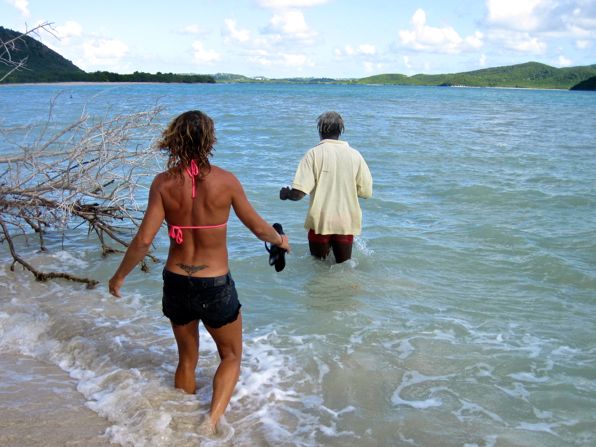 Flip flops were not ideal for this walk!