Unlike racers who regularly have downwind legs in their courses, or ocean sailors following the Coconut Milk Run, those of us who transited the Thorny Path south to the Caribbean, and regularly sail the windwards and leewards, don’t get that much opportunity to sail off the wind. In fact, I would say hardly ever, especially if we’re talking about true downwind sailing. The fact is, when Rebecca and I sailed on Two Fish from Panama to the Galapagos, that was the most downwind sailing that we had ever done!

On the rare occasions that we did find ourselves sailing on a broad reach or deeper, we normally rigged some form of preventer to the boom, especially if we were going to be on that tack for any period of time. I used the phrase “some form” to describe what we did because using the definitions below, it was not a true preventer at all.

It seems to me that there are several ways people control the boom when sailing downwind:

Preventer: A line typically rigged from the end of the boom* forward to the bow, and then back to the cockpit. Properly tensioned, this can help to prevent an accidental gybe.

Read about some preventer difficulties that our friends on Distant Shores had not too long ago.

Brace/Tackle: A line from the end of the boom to the toe rail, or to a cleat. This may control some of the movement of the boom, but due to its angle, may not prevent a gybe.

We found that our friends on Two Fish frequently used a brace line to control the banging of the boom in light air and sloppy seas. I read that this line chafed though on one of their longer passages, requiring it to be replaced.

Boom Brake: Although there are different types, at least one device is similar to a rock climber’s figure 8 descender. It is attached to the boom close to the boom vang, and when the line running through it is tensioned, it creates friction, slowing/controlling the swing of the boom during gybes. 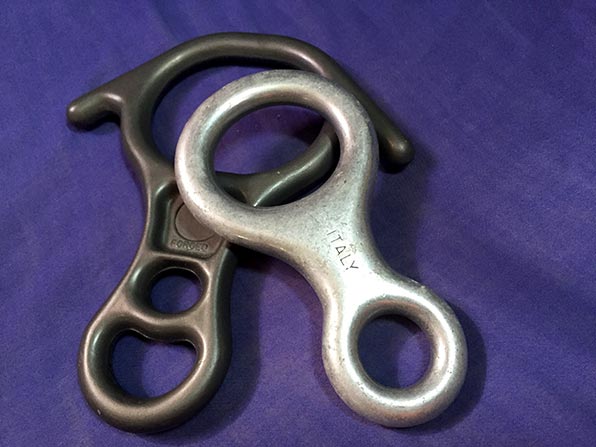 A couple of figure 8 descenders that I happen to have on board.

Here is an article that I found on Google where several of the commercially available boom brakes are compared.

Using the above definitions, what we normally rigged on ZTC was somewhere between a brace and a preventer. We would run a line from the end of the boom to a midship cleat, but we typically did not have it set up so that we could tension it with a winch, or control it from the cockpit. To set it, or release it, we would need to go forward to the cleat each time. 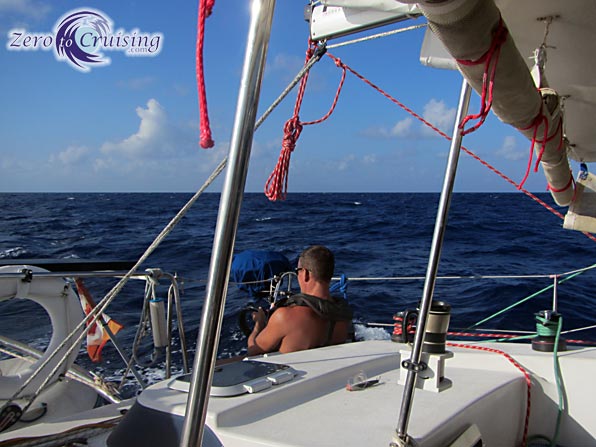 Contrary to what I wrote above, in this case, the red line, the preventer, has actually been lead back to a winch.

I’ve been giving this quite a bit of thought lately. There are several excellent articles on the Attainable Adventure Cruising website describing the set-up and usage of a good preventer system. There is also another article on that site singing the praises of a boom brake (although it does offer some critique of them as well). To view those articles you’ll need to pay for a membership, something that I do, and obviously feel is worthwhile. 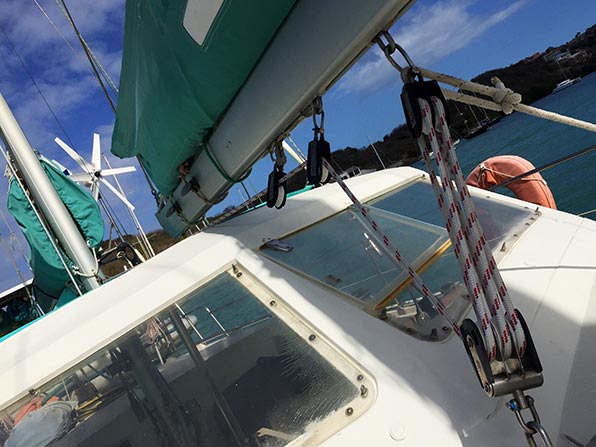 Should the preventer be set at the end of the boom, or closer to the mainsheet attachment? I’ve queried other Amel owners to find out what they do.

As there are only two main winches in our cockpit, and one small one normally reserved for furling the genoa, tensioning a preventer, or a boom brake, would be difficult without some additional hardware (clutches). Because of that, I’d like to have this well thought out before we start spending money and drilling holes!

On not being stranded