At least one less-than-enlightened fellow apparently fails to grasp the fact that Zero To Cruising is a blog about cruising, not current events. I base this on his recent Facebook attack, chastising me for my lack public acknowledgment of the recent horrific events surrounding the Boston Marathon. In his words, it was “shameful” that I continue to post about boats instead of following the herd, reposting a blow-by-blow account of the news like the rest of the world. I will be honest, that’s the kind of remark that might have netted him a slap across the face if it were issued in person and for the record, I can slap pretty hard. Was I pissed? Yeah, that’s an understatement but instead of worrying about it, I simply banned him from our Facebook page and moved on. 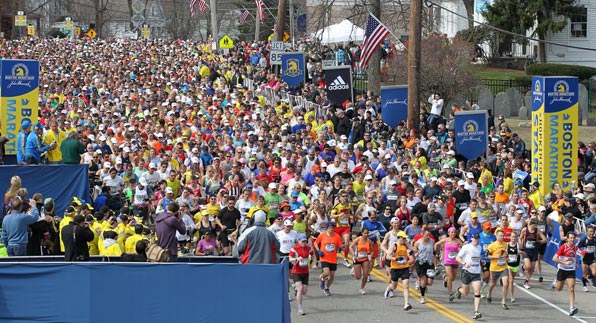 It’s likely that I would have let his comments slide entirely without mention if I hadn’t received a certain email from our good friends and fellow cruisers Kirk and Donna. Donna wrote…

…one of the runners in the Boston Marathon, Carol Downing, is a long ago friend of ours. Unfortunately, both of her daughters and her son in law were waiting for her at the finish line. Erika, a Towson preschool teacher, lost her leg below her knee and Nicole, a strength and fitness trainer, athletic director at Charlotte Athletic Club and also her mother’s coach for the marathon, had both of her legs broken and her Achilles tendon severed. Both girls are still in the hospital and facing huge medical costs. Erika will need a prothesis and Nicole has had multiple surgeries. I do not know many details but from what I understand, both girls will be in the hospital for a month. If you google ‘Erika Brannock Boston marathon’ you will get tons of info, or boston marathon maryland victims.

Do things like that bother us? We wouldn’t be human if they didn’t. I can’t even comprehend what inspires such craziness!

Funds have been set up to aid both of these victims. For those who have the resources, donation’s to assist Erika can be made on the Erika Brannock Fund website and the Charlotte Athletic Club, where Nicole works, is apparently accepting donations on her behalf: donations@charlotteathleticclub.com

It case it’s not entirely obvious, and apparently to some it is not, just because I don’t write about something doesn’t mean that it doesn’t affect us, and sometimes closely.

If you can, help others; if you cannot do that, at least do not harm them. Dalai Lama

If money were no object…