WARNING: The following post is long and very, VERY dry. Trust me on this… DO NOT read this for entertainment value!

To help me remember some of what we covered in last week’s Seamanship course I have decided to write it out. If some newbie actually learns something from this some day, so much the better. Here we go…

On every nautical chart you will find a compass rose similar to the one illustrated below. This one just happens to be on the chart for our local waters. 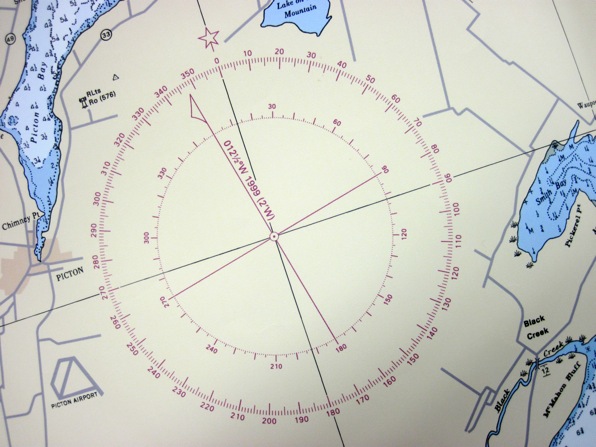 You will see that in the image there are actually two compass circles, an inner and an outer one. The outer circle’s star at the top, labeled 0˚, refers to True North. If you look on the inner circle you will note that 0˚on it, which refers to Magnetic North, does not match up with the outer one. This angular difference between True North and Magnetic North is referred to as Variation. This difference varies not only on where you are in the world but it also changes each year!

Why is this important? The compass on our boat shows magnetic bearings, but often courses are plotted using true bearings. Because of this difference we need to be able to go between the two figures taking this difference into account. How do we do this? Using the above image as an example, we first need to figure out what the variation would be today. Inside the two circles it says 12 1/2˚ W 1999 (2’W). What this means is that in the year 1999 Magnetic North would have been 12.5 degrees to the West of True North. But it also indicates that there is an ANNUAL INCREASE in this variation of 2′ (the ‘ symbol indicates minutes. There are 60 minutes in 1 degree). I say INCREASE because it is also to the West. If it had been East it would have been a DECREASE. So, with today being 2010, 11 years later, we need to multiply 11 x 2 to calculate the number of minutes difference.

Because it says that this change is to the W, which is the same direction as the initially-listed variation, we will need to add this amount. This will be easier to do if the figures are both in minutes. So, 12.5˚= 750′ (12.5 x 60).

Now let’s get this back to degrees.

Rounded off we end up with a variation today of approximately 13˚ West.

Note: If all the above is confusing I apologize. Remember I am writing it out so that I understand it, not teach it. 🙂

OK, so now we know that today, on whatever chart the above compass rose is marked on, Magnetic North will be 13˚ to the West of True North, and so will every other point on that compass. I’m sure you can imagine that 13˚ is a fairly significant amount that definitely needs to be taken into consideration when plotting a course!

So now what? Here is where the post’s title CADET comes in. CADET stands for: 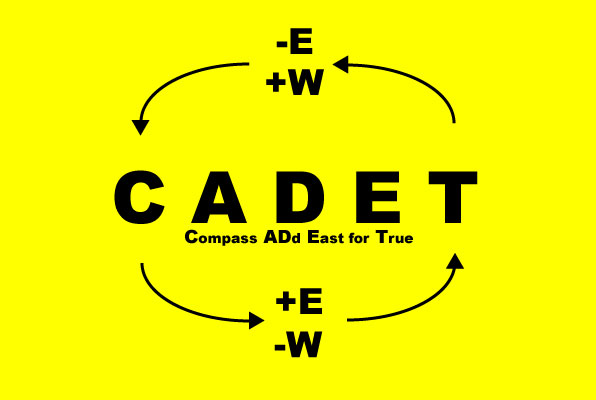 This acronym is a reminder for the process of going back and forth between Compass (Magnetic) bearings and True bearings. As an example, let’s say that you were steering a compass course of 090 (zero nine zero, not ninety) and we have the variation of 13˚W (from our calculations above), how would we determine the True bearing? Because we are going from Compass to True we will use the bottom of the graphic (note the direction of the arrows). If the variation was East we would be adding it from our course. Because it is west we will do the opposite and subtract it. 13˚ deducted from 90˚ gives us a True bearing of 077. What if we had a True bearing and wanted to know what course to steer? We would then use the top of the graphic (arrows are pointing from True to Compass). Using an example of a 050 True course and the same 13˚W variation we would add 13 to 50, coming up with a magnetic, or Compass bearing of 063.

That’s pretty much it. There are a couple of other ways to remember this, but the above seems straight forward enough, once you get your head around it.

We have one more variable in this process yet to be discussed and that is Deviation. Deviation is defined by wikipedia as “the error induced in a compass by local magnetic fields.” This varies from boat to boat. If we know the Deviation of our boat’s compass we can calculate how it affects our bearings using the same basic formula.

See. I told you not to read all that! I can’t believe that I even took the time to write all that!!!

We traded in our sail boat for a motor boat!