Whereas it seems that a great many cruisers tend to travel in groups almost exclusively, Rebecca and I have not had the company of a buddy-boat on a passage since as far back as Puerto Rico, last year. This is definitely not because we are adverse to the idea of traveling with other people but more likely due to the fact that we just prefer to travel on our own timetable instead of relying upon the joint-decision-making-process of a group. We were perfectly happy though to break that trend, opting to travel to Barbuda alongside our new friends Kelly and George on s/v Earthling.

After staging for the trip the previous day in Dickenson Bay, Antigua, both our crews were ready to promptly raise anchors and set sails at 6:00 AM yesterday morning. As is typical for this time of year, the wind has been blowing steadily from the NE for weeks. Our hopes were that the forecast we had read would hold true and that the wind would veer a bit to the east to make the trip north to Barbuda more pleasant. And guess what? It did! Both boats were able to make the entire trip on one tack, something that doesn’t happen all that often around here, and we were able to maintain a speed of between 5-7 knots. Although the seas were a bit more rough than we would have liked, we had a great trip, arriving at our Barbuda waypoint, just outside the reef-strewn shallows, at 10:30 AM, much earlier than anticipated. I am humbled to say that not only did Earthling beat us in the “race,” they also kicked our @sses in the fishing competition, landing two to our zero.

Note: Although no formal race or fishing competition was announced, this is an understood agreement between two vessels heading in the same direction. We were definitely competing!

Two nice side benefits that come from traveling with a buddy boat are:

When we reached the coast of Barbuda, Rebecca on ZTC and Kelly on Earthling, took a place on the bow to spot our way through the reefs. This is a very important job as relying solely upon charts, electronic or otherwise, in waters such as this is not wise. We chose Coco Point Lodge Harbour as our first anchorage, primarily because a north swell was predicted to begin later today and we figured that it would be protected. The water here is extremely clear and we set our anchor behind the reef in only five feet of water, our friends with a much larger draft wisely choosing to stay in a bit deeper water. Both our anchor, and Earthling’s, buried themselves nicely in the soft sand and we soon had picnic lunches packed to head to the beach.

After a few hours of exploring and relaxing, we headed back to our boats, assuming it was much later in the day. We were surprised to find that it was still only about 3:00 PM, a full day’s activities already under our belt. The day was far from over though as we still had Earthling’s fish to consume. They chose to prepare dinner on their boat and bring it over to ZTC later on where we shared the delicious meal, drinks and some fun and silliness until far past cruisers’ midnight. I wonder what today has in store for us! 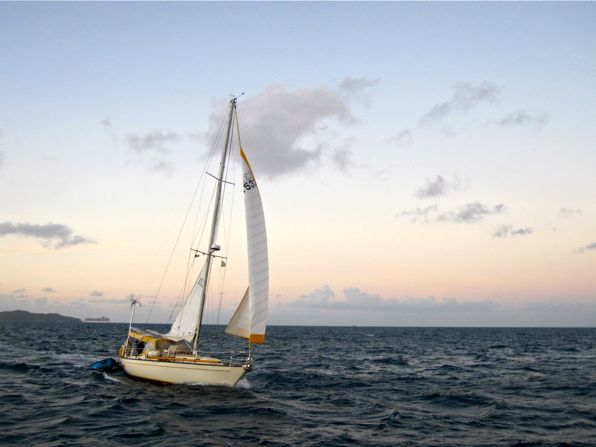 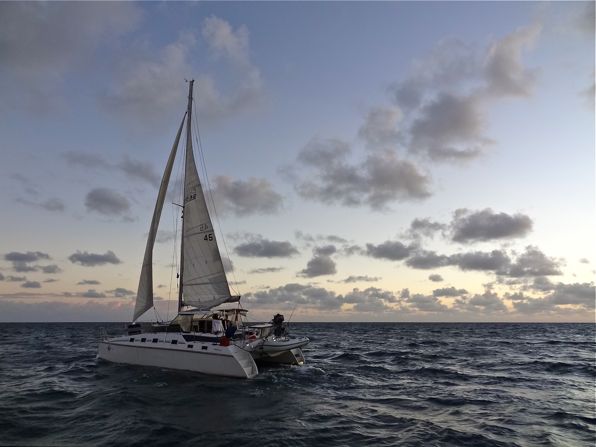 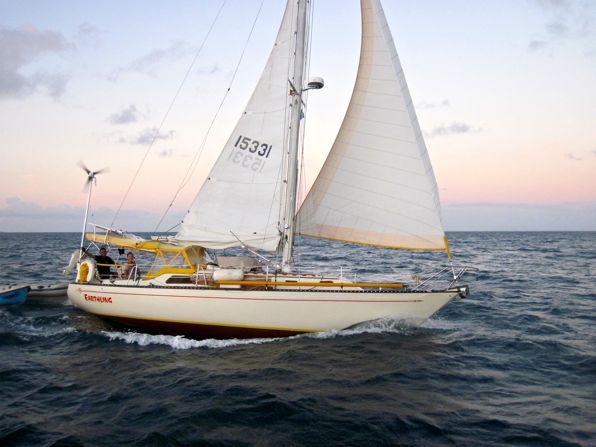 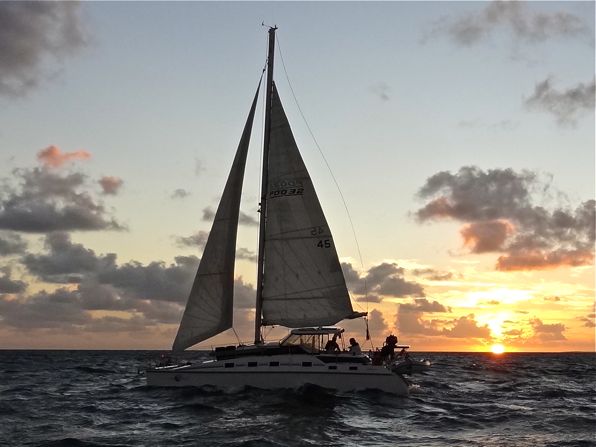 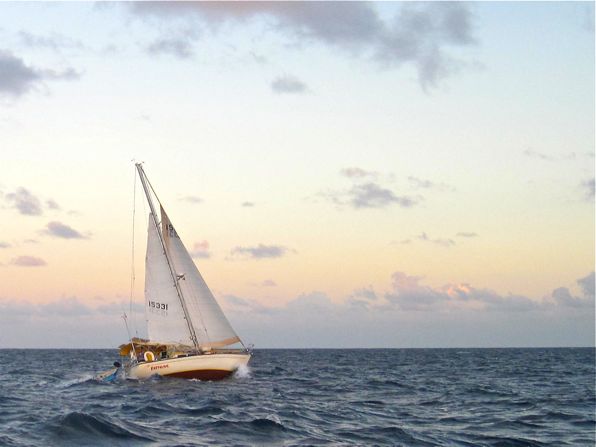 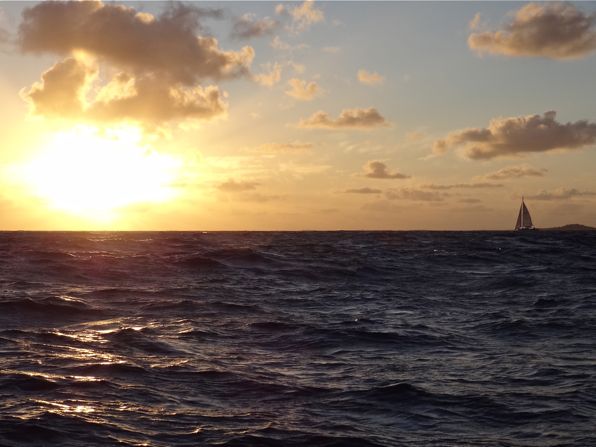 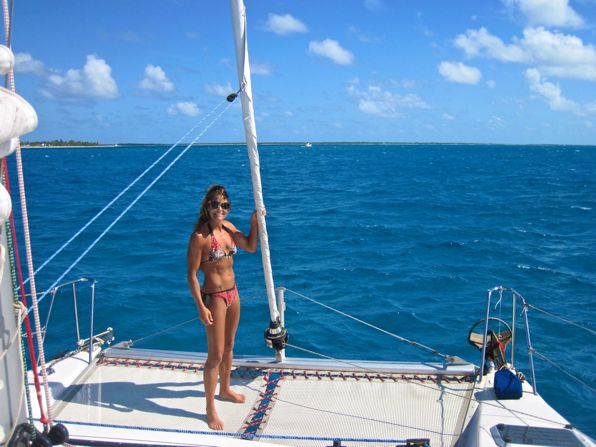 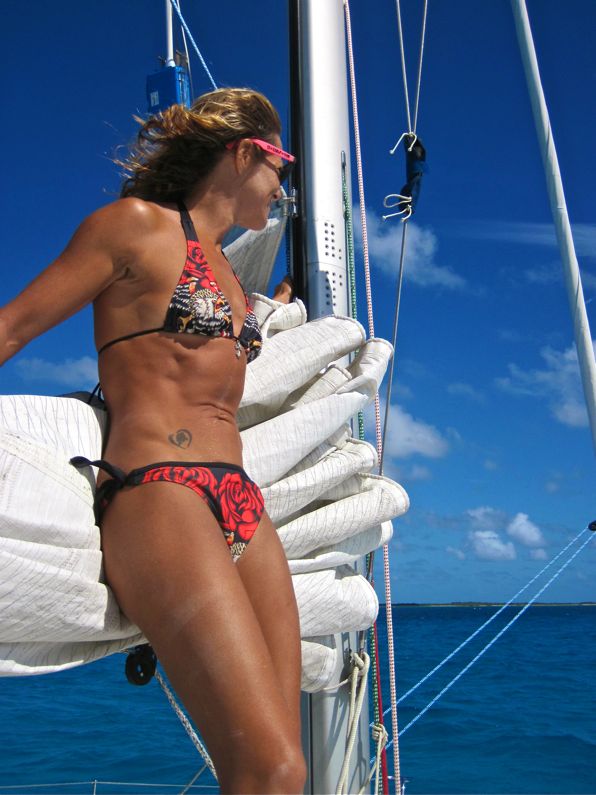 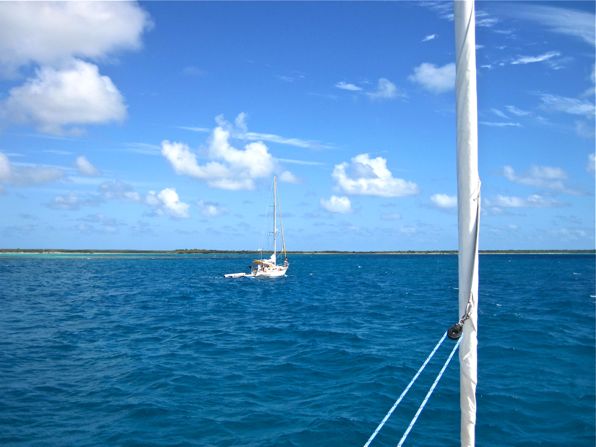 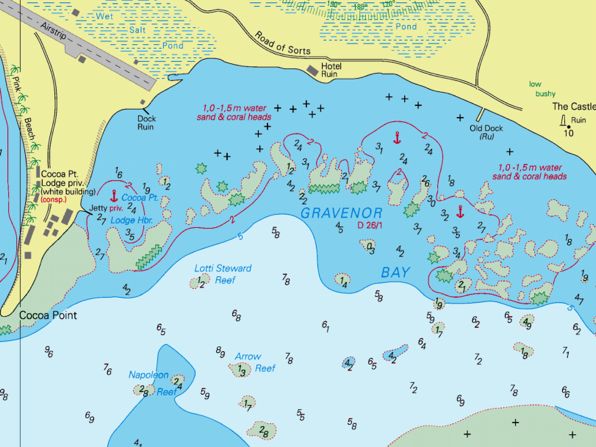 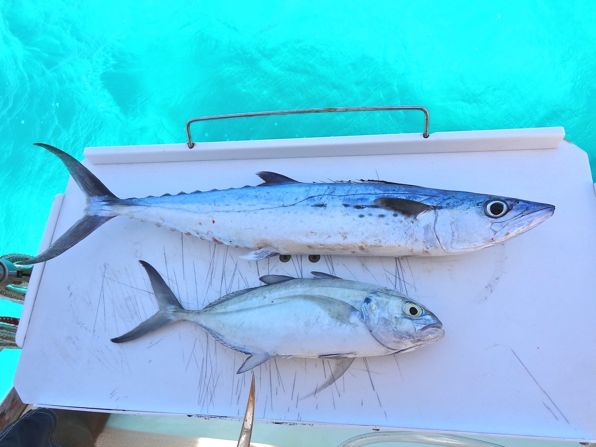 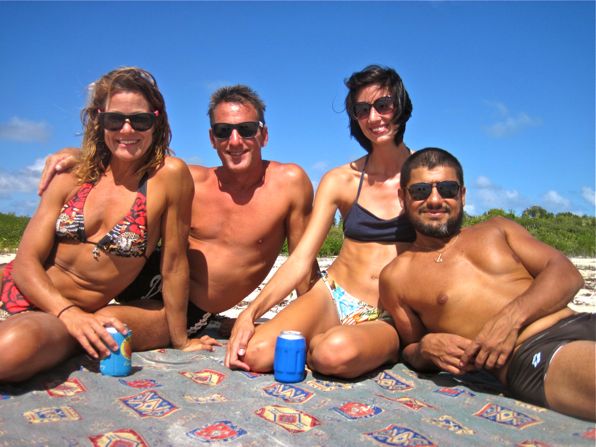 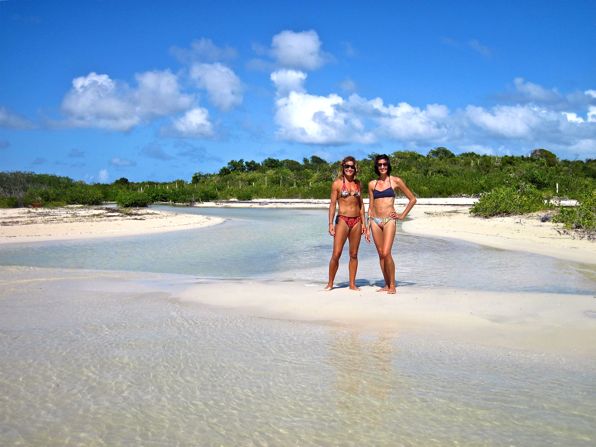 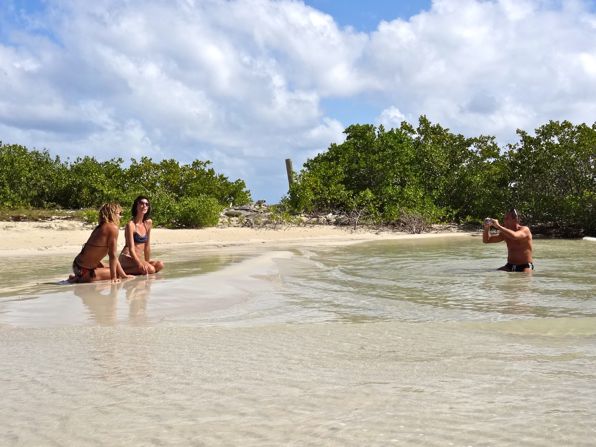 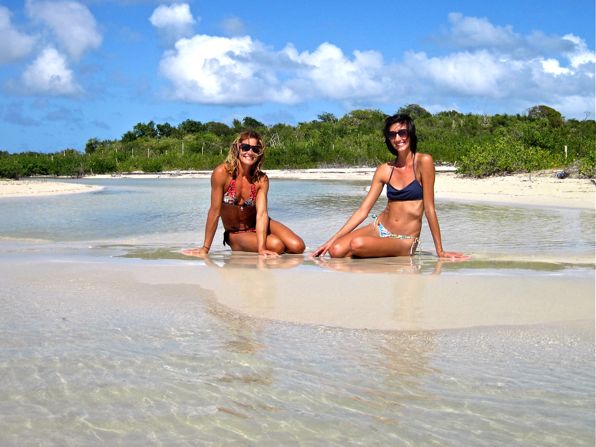 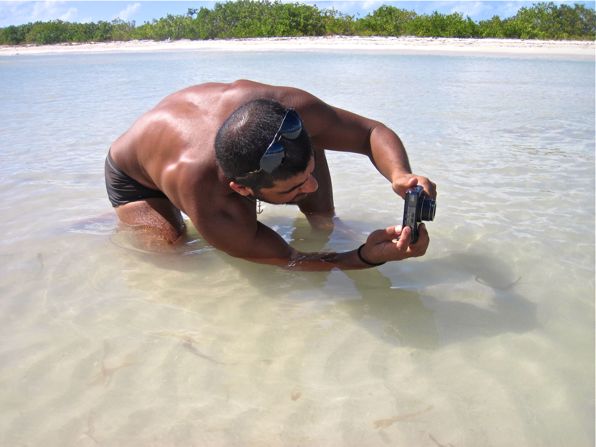 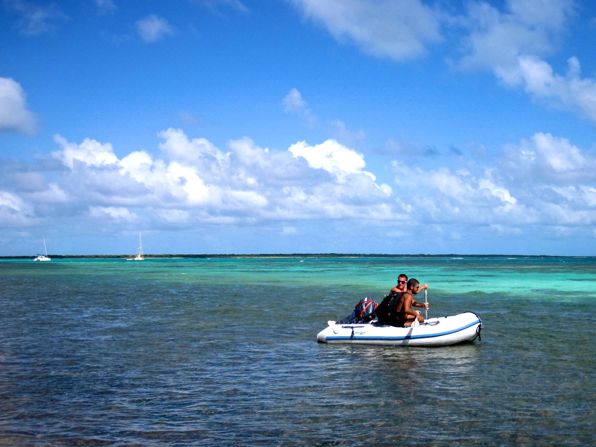 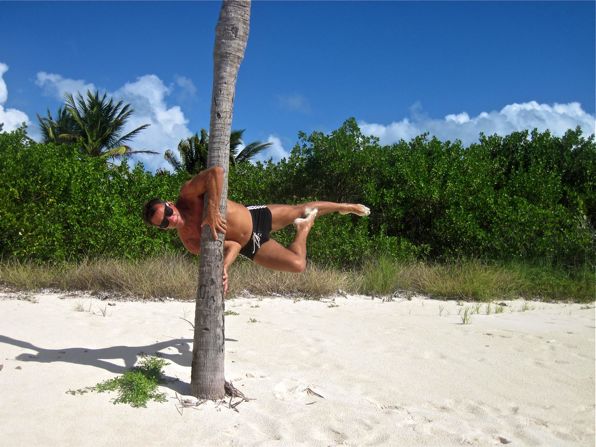 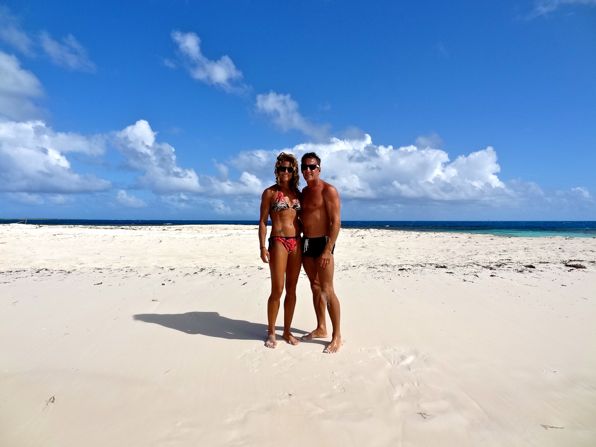 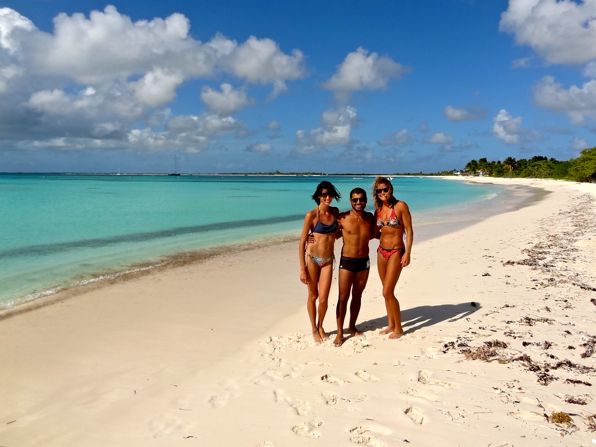 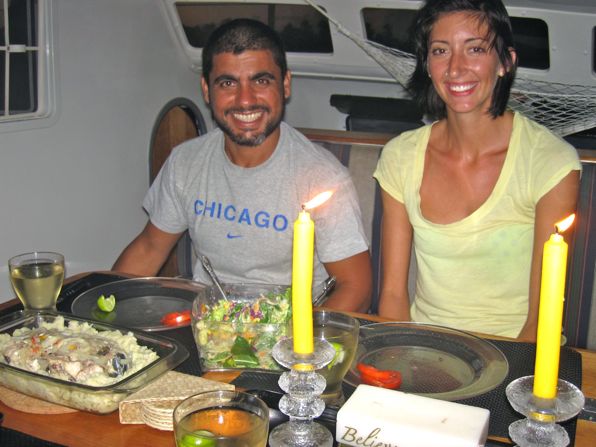 Can you believe it? We were sailing!

All clouds have silver linings.