Boat boys to the rescue

From the comments that I’ve been reading on our friends’ Facebook status updates, it’s been a windy couple of days everywhere. Dominica hasn’t been spared those conditions either and although it was blowing somewhat less yesterday, the day before saw the wind frequently gusting over 30 knots. This type of weather always puts boaters a bit on edge and for good reason as those without sufficient ground tackle, or without well-set anchors, often find themselves drifting across the bay.

Just after breakfast on Sunday morning we were drawn out into our cockpit by the loud sound of a nearby air horn. This single horn was joined by another, and calls soon rang out over the VHF that a catamaran was dragging anchor. As Prince Rupert Bay is quite large with dozens of boats at anchor, it took us a while to determine just which boat these people were referring to. We saw only one catamaran underway and it was moving so quickly, and at an angle almost perpendicular to the wind, that we thought it must be under power. The bridle lines dragging loosely beside the boat was a giveaway though that all was not well. 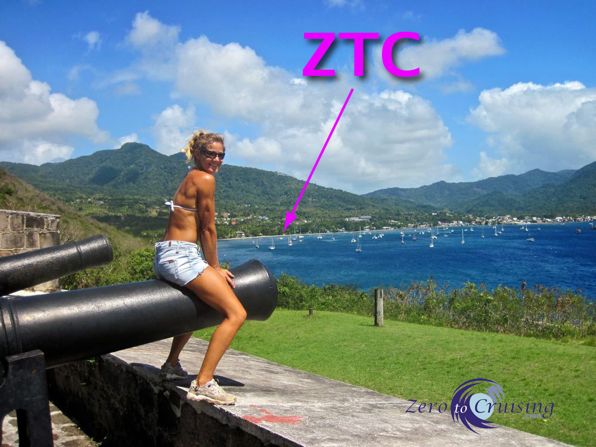 There are a lot of boats at anchor in Prince Rupert Bay.

At the same time as I was lowering our dinghy into the water, Rebecca and I saw the catamaran blow by two monohulls and head straight towards the shore. We were both amazed that the boat didn’t strike any other vessels because it sure looked like it was going to. I jumped in our dinghy to race over there to lend a hand and arrived just as one other boater did, and at the same time the boat came to rest on the rocky shoreline. The two of us were banging on the hull, unsuccessfully trying to raise the awareness of whoever was on board. Unbeknownst to us at the time, even though there was a dinghy tied to the cat’s stern, the owners were not onboard, having been picked up to go on a river tour earlier that day. 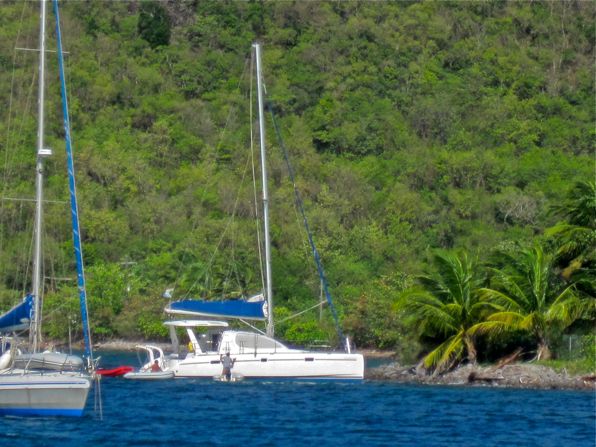 Banging on the hull, trying to wake up the boat’s owners.

Within a few minutes, after hearing the call for assistance on the radio, several boat boys and a couple of other cruisers showed up on scene. As there was little I would have been able to do with our little dinghy and 9.9 HP engine, I stood off and let the guys with the big engines deal with the issue. Fortunately there was not a lot of wave action driving the boat onto the rocks and they were able to get it off the shore in short order. Within minutes the stray cat (pun intended) was safely tied to an available mooring ball. It looked to me as if the boat might have escaped with little more than some cosmetic damage. 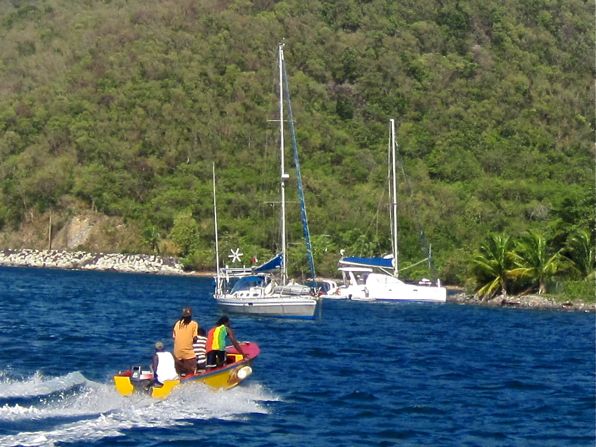 Boat boys to the rescue. 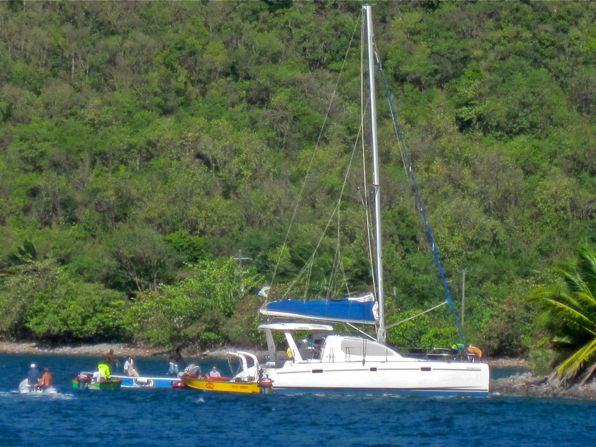 The entire rescue party on hand.

While this bit of drama had most everyone’s attention, it was not the only bit of excitement. Rebecca, who had stayed on board ZTC to make sure our own boat didn’t run into any problems, witnessed the boat just to starboard of us drag anchor, narrowly missing the monohull astern of it. Thankfully that boat’s owners were onboard and they we able to deal with the situation before it got out of hand. We also heard a couple of other reports over the radio of boats not staying put as their owners had intended. Fortunately for us, our boat didn’t move. It’s extremely nice to know though that should we ever run into trouble like this, there are people around who will take action to help out! 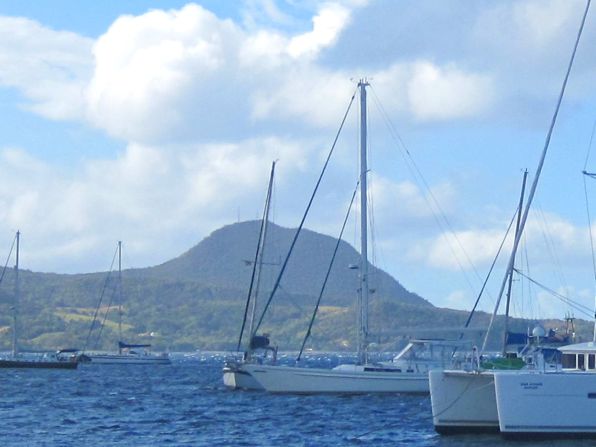 Our sailboat is now a…

Can I work while traveling? Yes, but be careful.

Trying to make the boat shine