Some of you may recall reading about our first Bikes on Boats experience. On that occasion, we packed our two bikes onto a small local fishing boat and transported them across the Bahía de Concepción to resume riding the Baja Divide. This time we loaded our bikes onto a much larger vessel, to travel across a much larger body of water. We’d be leaving Baja California behind to continue our journey in Mazatlan. 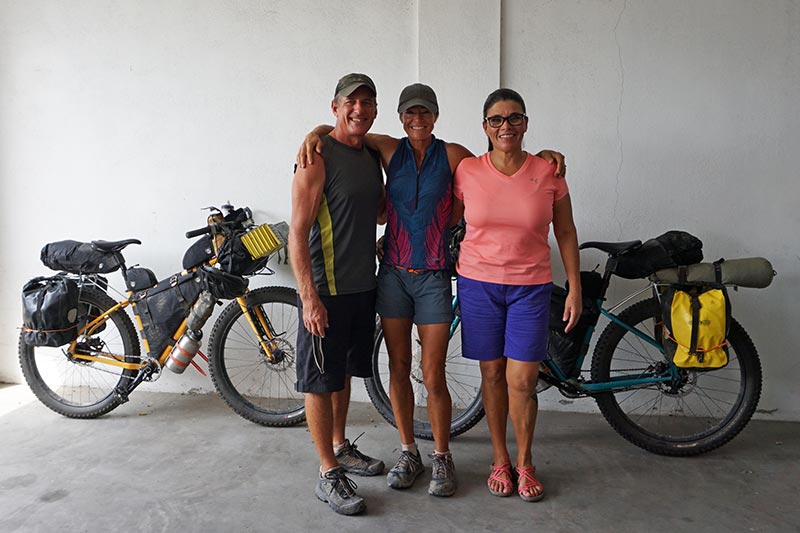 Saying goodbye to Tuly, our Warmshowers host in La Paz. She rocks!

We spent 5 whole days in La Paz, resting our legs and making preparations for the next portion of our journey. The day before we were set to depart, we, along with another cyclist we met at Tuly’s, Thiago, rode down to the Baja Ferries office to purchase our tickets (bring your passport with you when you go to do this). Each ticket cost us 1250 pesos, plus another 200 pesos for each bike.

Note: Check your ticket carefully. They recorded Rebecca’s name incorrectly on her ticket and that caused a bit of drama when boarding. 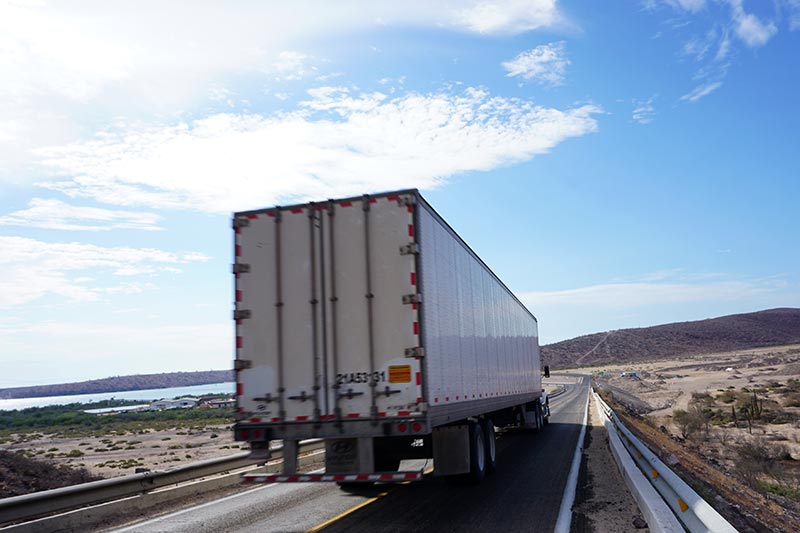 It took us about 1.5 hours to ride from downtown La Paz to the ferry terminal.

The ride from Tuly’s to the ferry terminal was uneventful, and we were able to complete the majority of it on bike paths and sidewalks. Only the very last portion of the ride had us dealing with traffic and hills. Excited to get going, we arrived at the terminal with plenty of time to spare, so settled down to wait for boarding in the air-conditioned lobby. When it came time to board, the process was done quickly and efficiently. 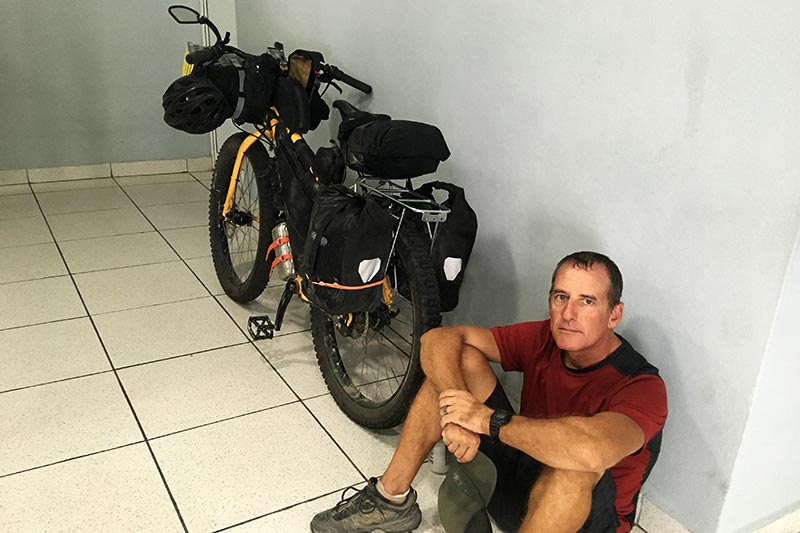 Waiting to board in the air-conditioned lobby.

Although cyclists do routinely make this trip, it obviously doesn’t happen often enough for all of the employees to know exactly how to handle it. Both when boarding, and the next day, when disembarking, we had employees radio their supervisor to find out what to do with us and our bikes.

Although we were each assigned seats, Rebecca and I opted to sleep outside on the deck. We had our sleeping pads with us which made the deck reasonably comfortable. This also no doubt elicited some jealousy by the other passengers who were forced to lie on the hard floor. About midway through the evening, it started to rain, driving us inside. There were plenty of places to crash though so we simply found another spot, and resumed our slumber. 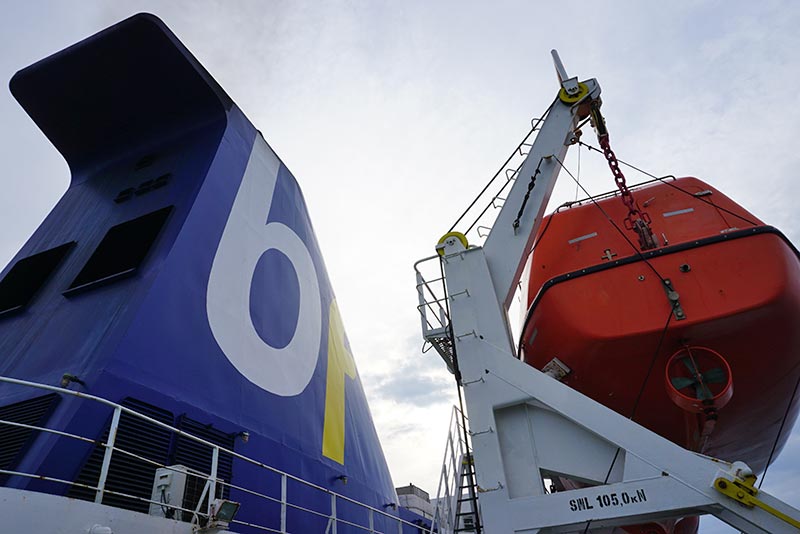 Lifeboat. Hoping it won’t be put into service while we’re on board the ferry.

Although I have watched ships moor many times, I’ve never been on one as the process is being completed. The next day I watched intently as we navigated our way into the Mazatlan harbor, and tied up to the pier. 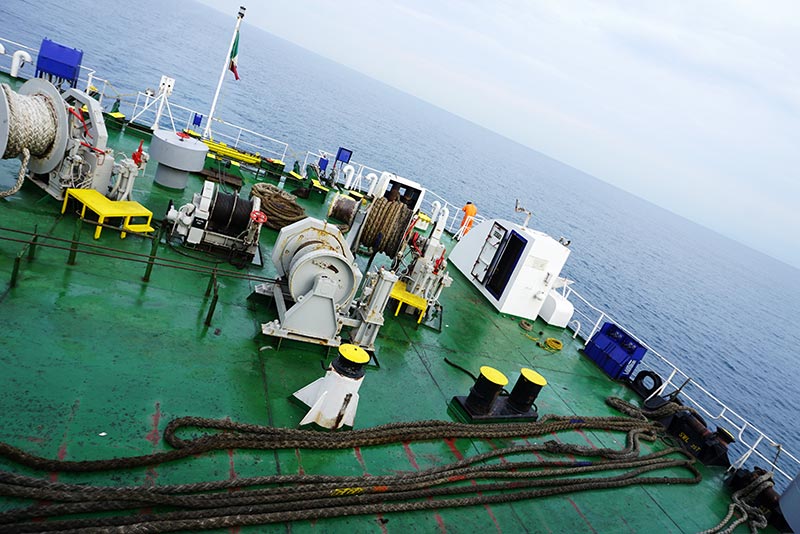 Hawsers flaked out for tangle-free deployment. 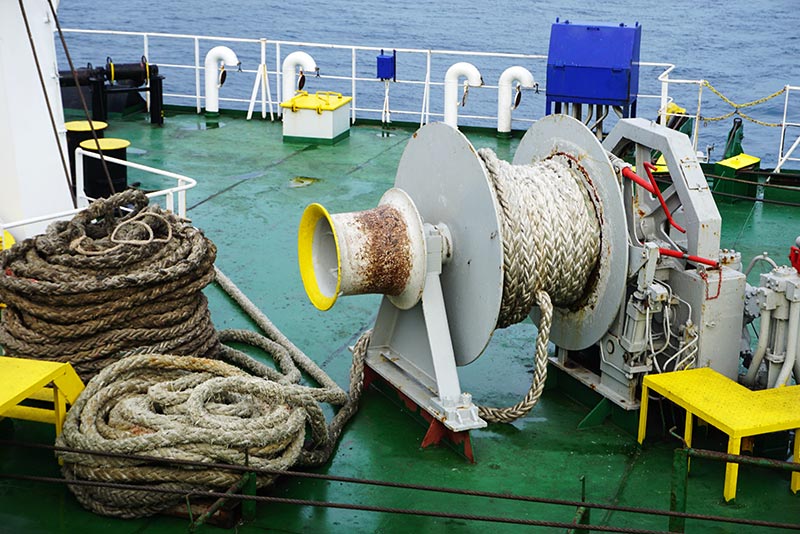 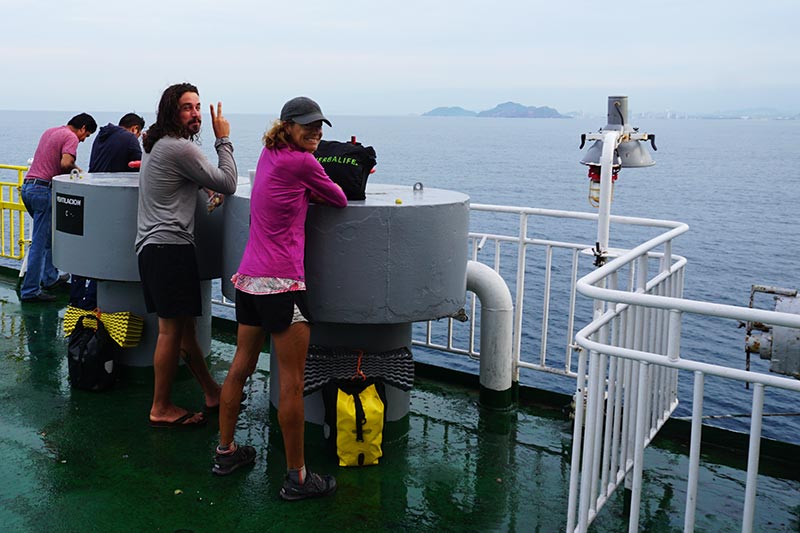 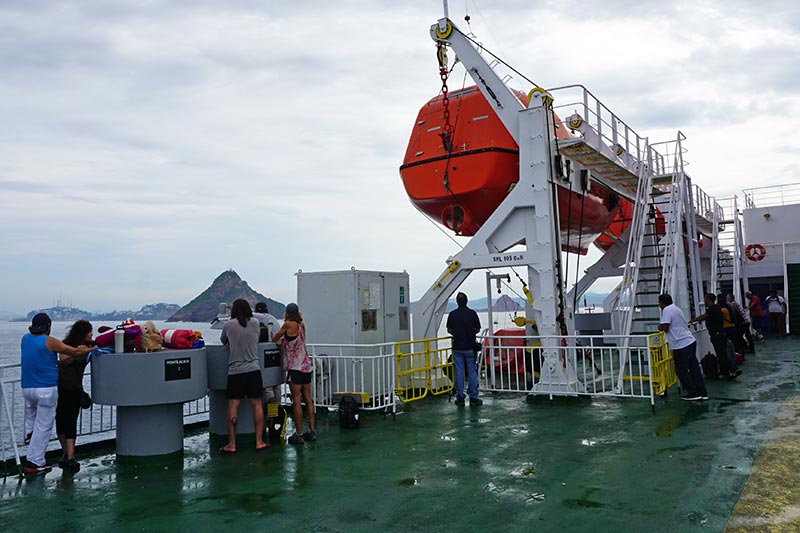 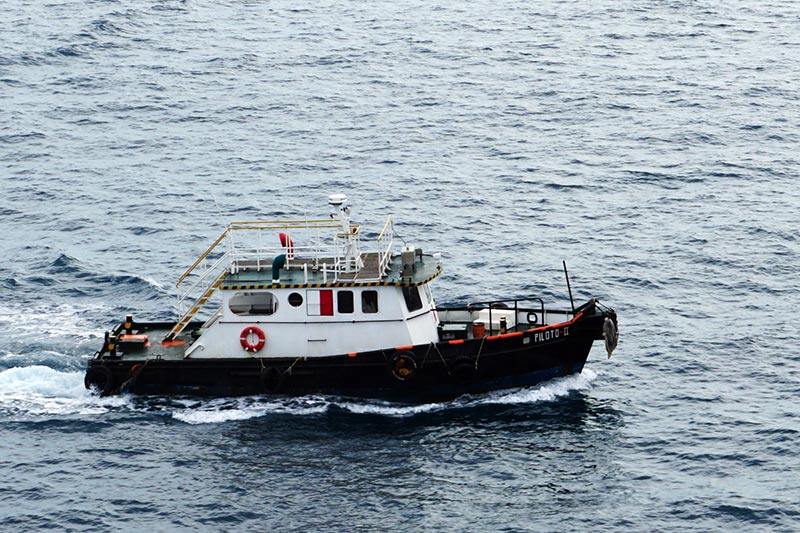 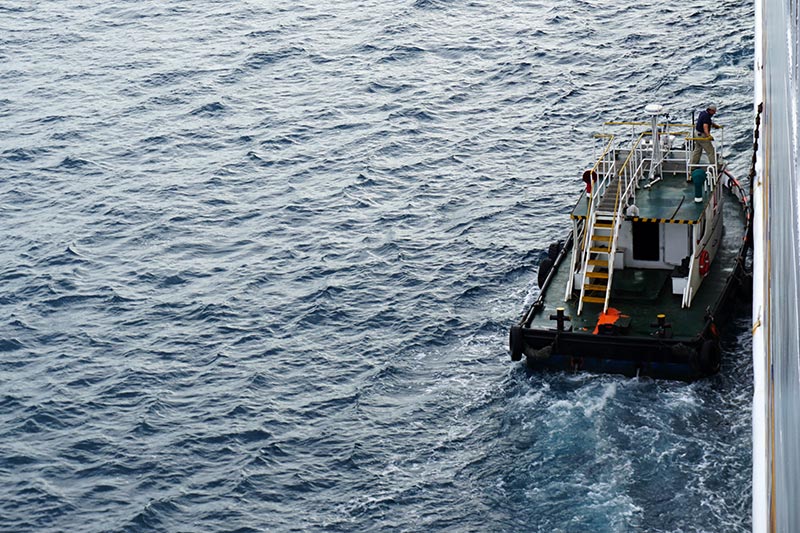 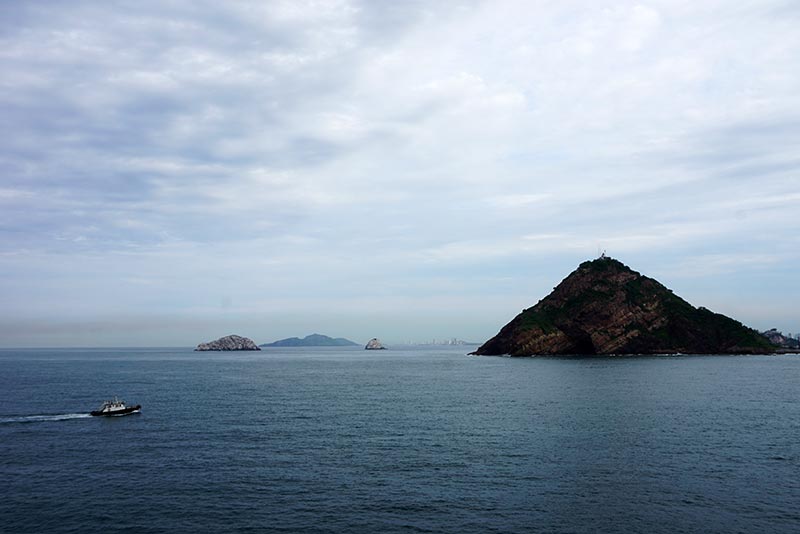 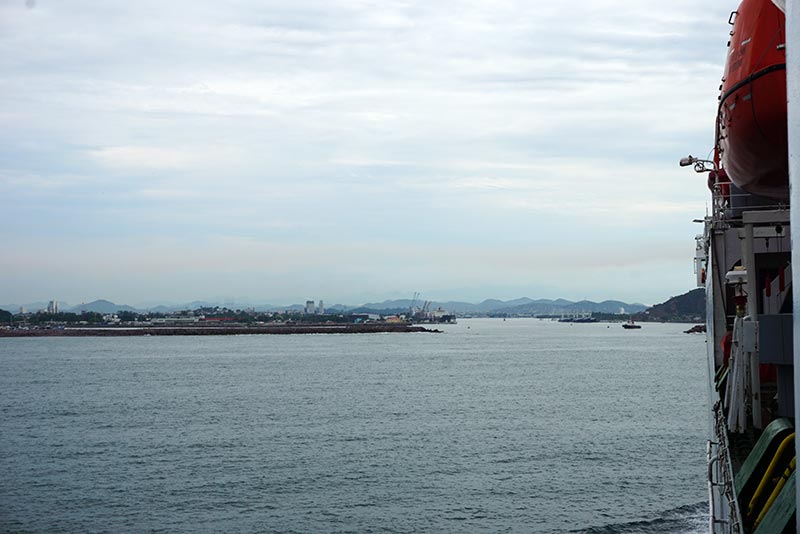 The entrance to the harbor looks pretty tiny from here! 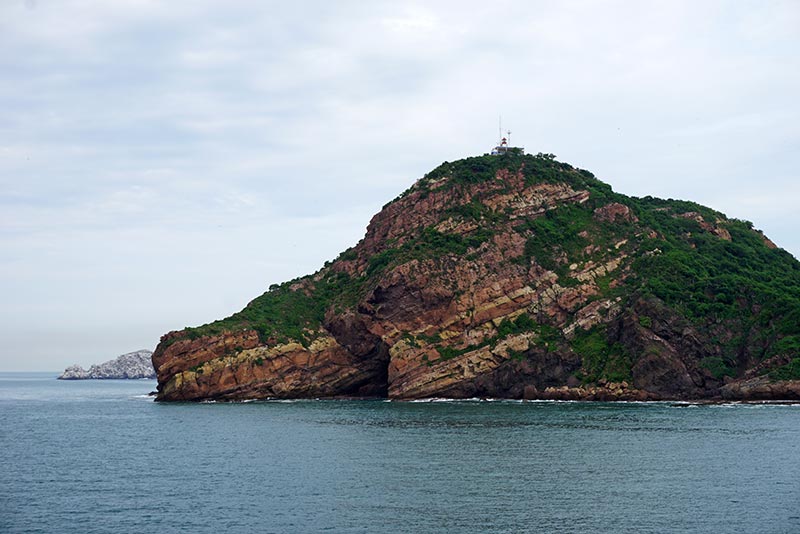 Love the colors of the rock. 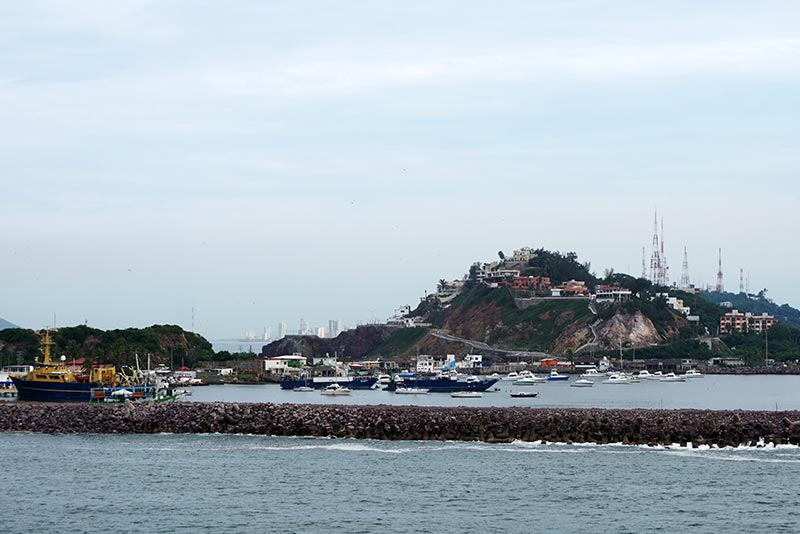 Quite a busy port. 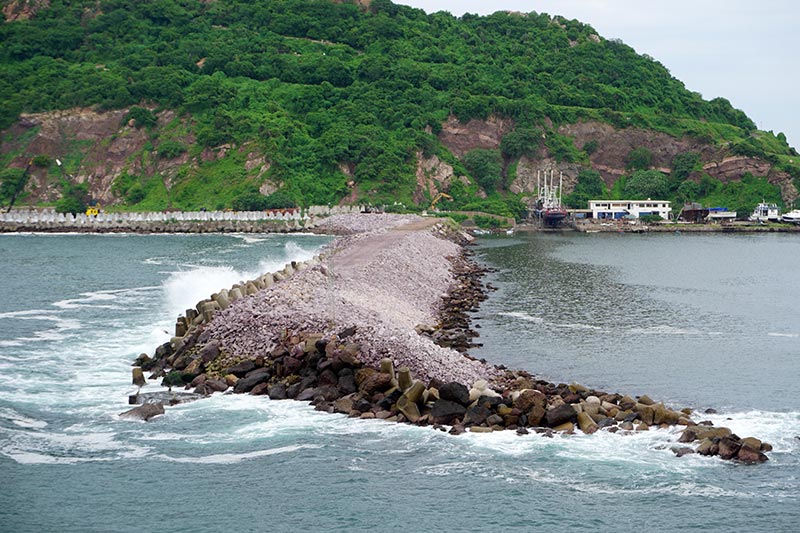 I’m glad I’m not piloting this ship in. 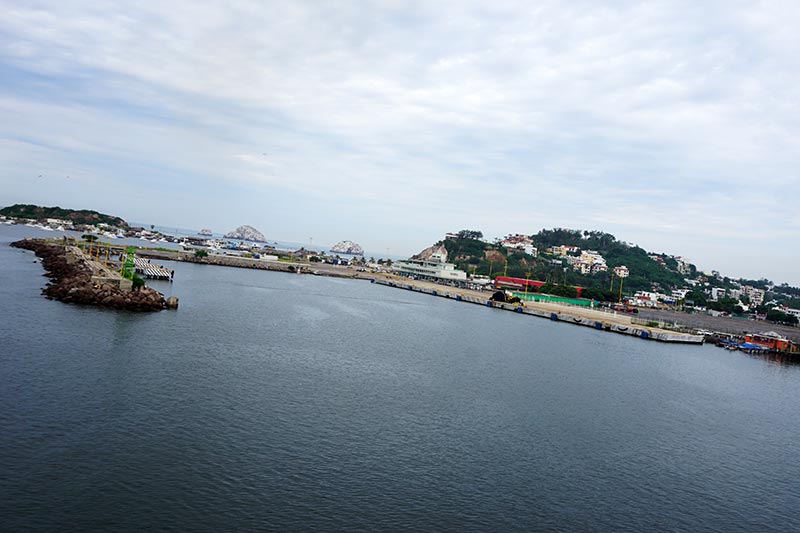 We’ll just spin the ship around and back it in there, OK? 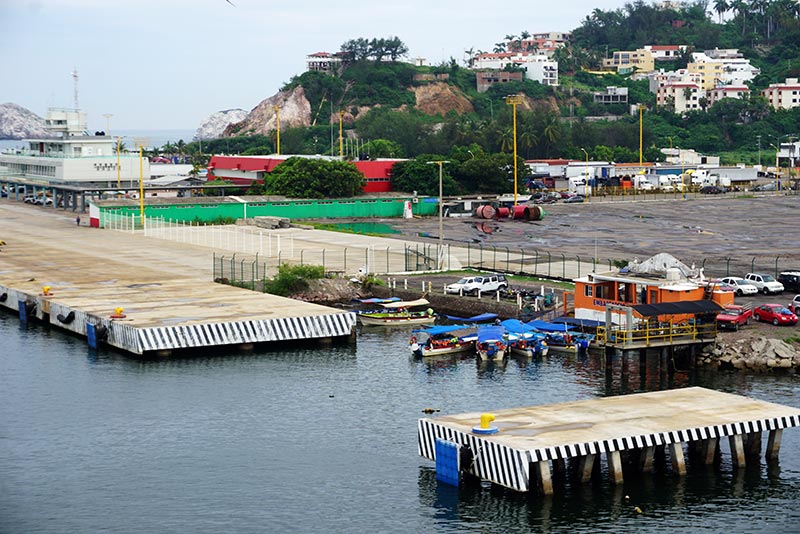 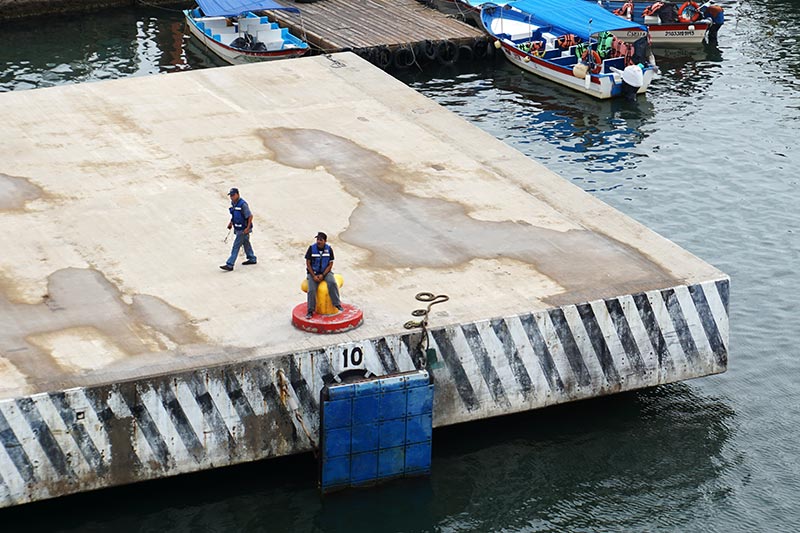 Line handlers at the ready. 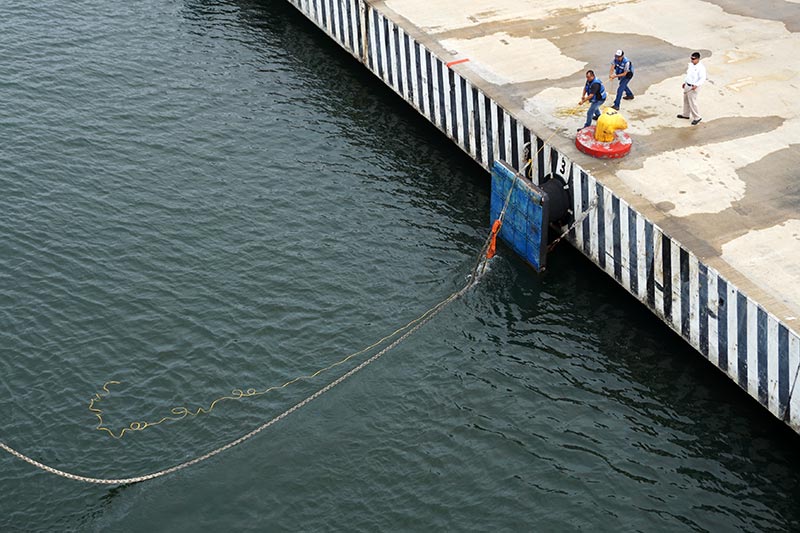 A messenger line was thrown to the line handlers, who then use it to haul in the hawser. 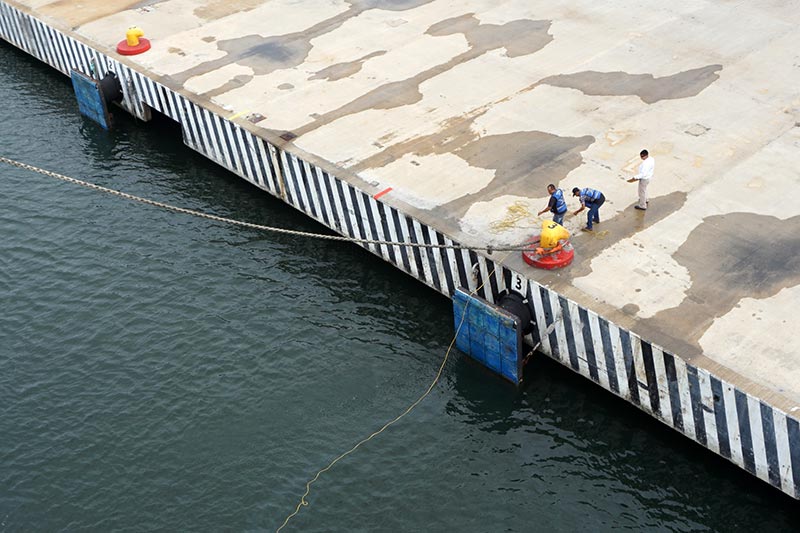 One line secure. Who’s the guy in the white shirt? A supervisor? 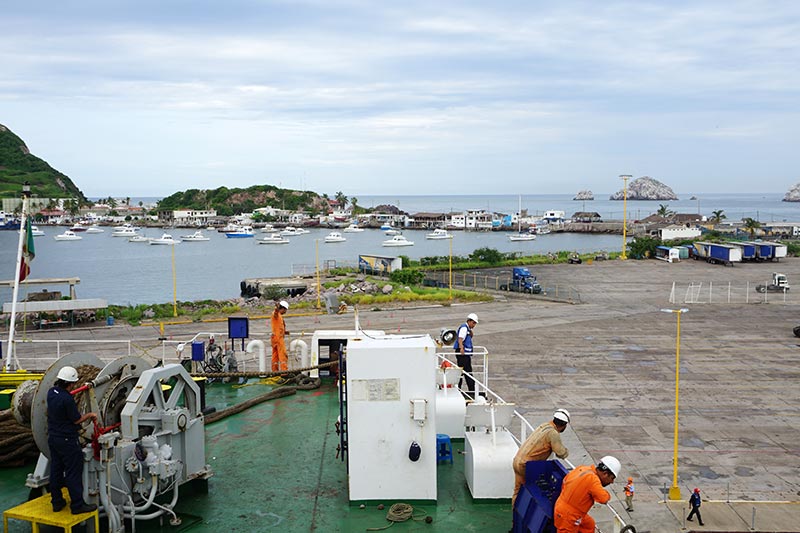 Hawser being trimmed in by the winch operator. 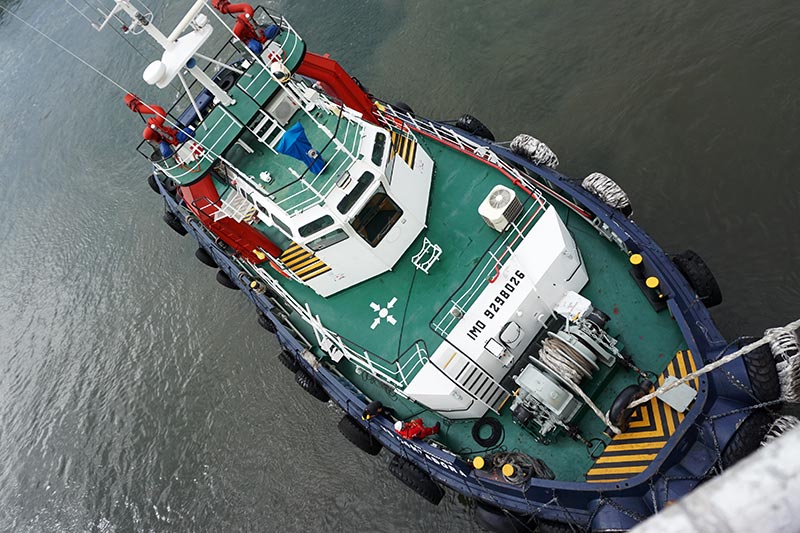 Assistance on the other side of the ship! 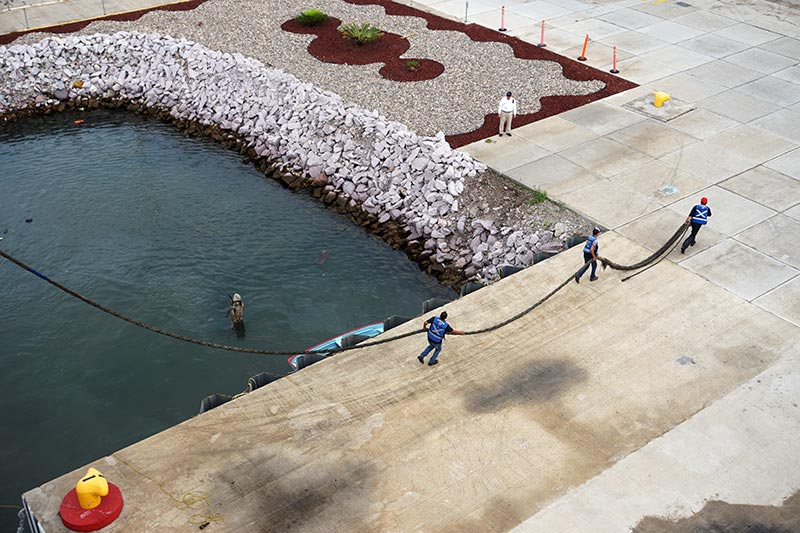 How heavy are the lines? That’s three guys pulling it. 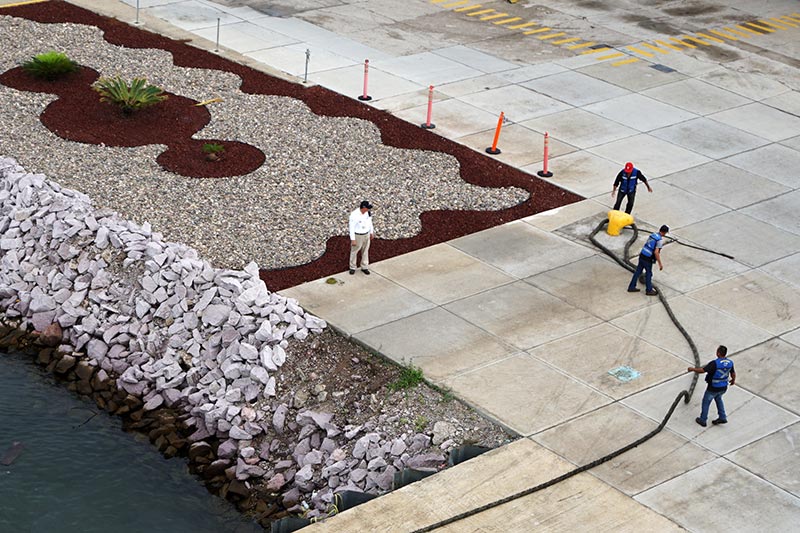 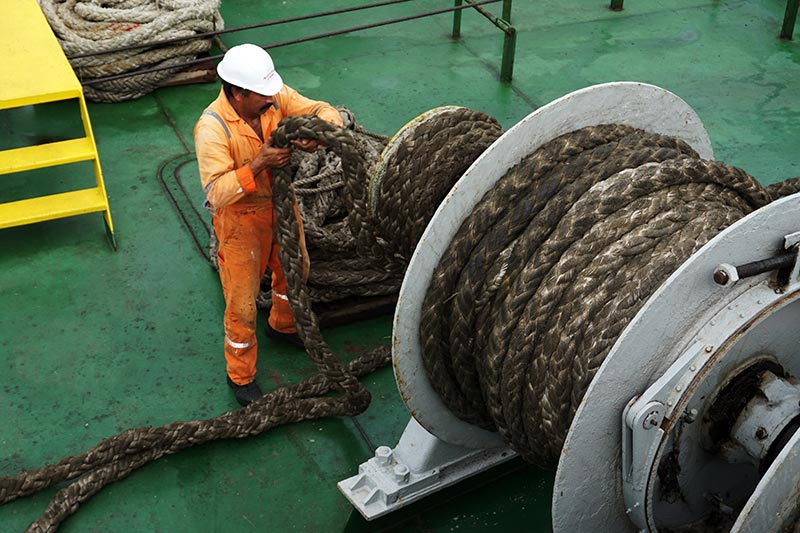 That is some thick rope!

When we were ultimately permitted to, we went below decks to retrieve our bikes and found them exactly as we had left them. It didn’t take us long to re-secure our panniers, and disembark. Unfortunately, in his excitement to get going, Thiago inadvertently got a strap caught in his rear wheel which ended up bending his derailleur. He would be forced to visit a bike shop before he could begin riding. As he was likely going to be traveling faster than us anyway, and was also heading in the same direction, we said our farewells, knowing that we’d probably cross paths again in the not-too-distant future. 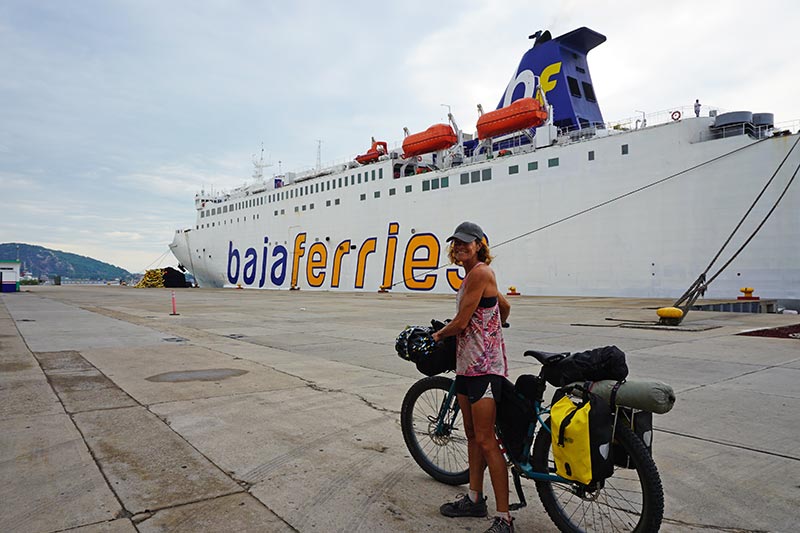 And we made it to Mazatlan. Next chapter ready to begin!

Home for the holidays

Plotting our jailbreak from prison