It’s been a little over a week since we’ve had our new adventure vehicles. We’ve been riding almost every day, although with the steep terrain around here, our rides haven’t been exceptionally long. Yesterday we decided to step up our game a bit, and make our way into town. Our destination was Corona, CA, approximately 10 miles away from our daughter’s home. As we navigated the main road between the two destinations, with cars and trucks speeding past us, sometimes only inches away, I came upon a couple of epiphanies.

Where did all this traffic come from?

We have driven the road into Corona more than a dozen times, but even though I took note that there was a bit of traffic on that road, I never fully grasped just how busy the road was. There were cars buzzing by us almost the entire way. The wide dirt shoulder that existed at portions of the road were greatly appreciated, giving us a welcome safety buffer, but when the shoulder disappeared, most often on sharp corners, the passing traffic became significantly less comfortable. Do automobile drivers notice this kind of traffic? When traffic stops because of an accident or construction, or on extremely congested highways, I’m sure they do notice it. On normally busy roads though, when the cars are all moving at the same speed, I don’t think they do. Or at least, I certainly didn’t. 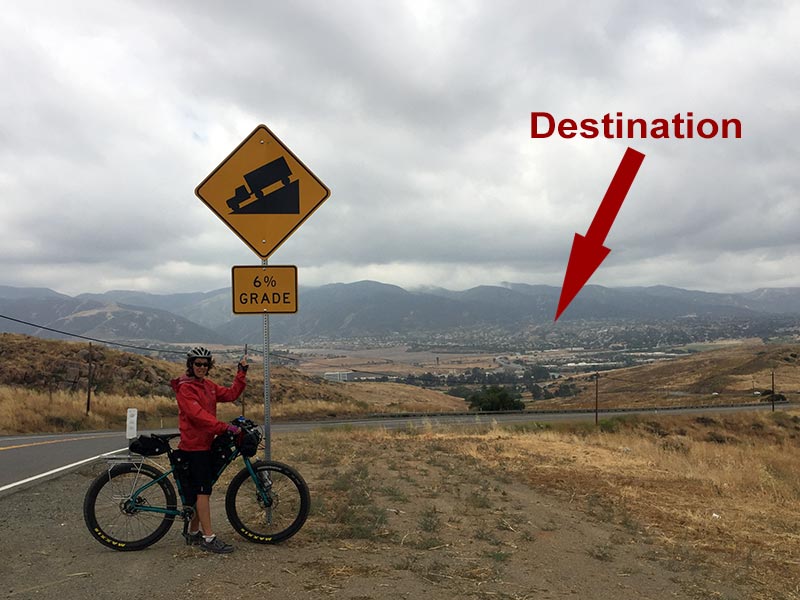 Heading into town, downhill. Note the jacket: It was cool!

Who put these hills here?

The other thing that I had failed to note while driving on this road was the length of the hills, and their grade. Or for that matter, the existence of hills altogether! Certainly, when driving up or down steep mountains in a car, the elevation change becomes apparent. Less steep grades more often go unnoticed though, but on a bike, they certainly don’t!

“It is by riding a bicycle that you learn the contours of a country best, since you have to sweat up the hills and coast down them. Thus you remember them as they actually are, while in a motor car only a high hill impresses you, and you have no such accurate remembrance of country you have driven through as you gain by riding a bicycle.” – Ernest Hemingway

As it turned out, the 9-10 miles that we rode into town was almost entirely downhill, and so it passed by without too much effort, and relatively quickly. The return trip home was another matter. I’m happy to report though that even with the long hills, we managed to complete the entire return trip with only a couple of stops totaling no more than 60 seconds, and those stops were not because of fatigue, but rather to wipe the sweat out of our eyes. All in all, it was a good ride, but neither of us are too eager to tackle that busy road again. The trails and side roads are much more fun!