Because I can’t tread water that long!

One blog I read on a regular basis is Boat Bits. I guess I like the author’s frequently contrarian philosophy and the fact that he always shares good info. The following is from a private email conversation that I had with him (shared with permission of course) after his post about changing back to foam PFDs from inflatable ones.

We had a pair of Crewsaver PFD’s, top of the line and we had them for three years (they replaced another set by Crewsaver). When it came time to do their yearly “inspection,” I blew up the first one (orally) and as much as I blew in, air seemed to blow out. I then looked at it and it seemed about 50% of the seams were no longer… well seams… if you know what I mean. I then did the same for the second one and it was not exactly a surprise when the same thing happened.

Since both PFD’s were toast I then tried the CO2 inflation and while one worked, the other did not (rusted shut… but in such a way that visual inspection simply did not offer a clue that something was amiss).

If you are not aware of Crewsaver, they are the number one brand in the UK who has the most strict rules concerning PFDs… The Mustang of Europe if you will.

We replaced our Crewsavers with Plastimos and they still seem OK but I now have this nagging distrust for things inflatable that are glued or welded together as I have seen so many fabric glue weld joins fail. Throw in the fact that CO2 is really really cold (like freezing and that would pay hell with any dodgy seams).

Anyway, the decision to go back with a foam PFD is all about the thought that when sailing over to Europe, further afield, or further than I care to swim, if shit happens and I fall overboard, my last thoughts will not be f%#$&g stupid seams. As it happens, I speak from some experience as sailing to Hawaii once we screwed up a spinnaker launch which left me swimming in the Pacific, 600 miles from San Francisco, watching my boat sail over the horizon. In spite of a crew of twelve very exceptional sailors (it was the Transpac), who all saw me hit the water, it still took them over six hours to find me. Trust me, this is a long time to tread water! So, I have a certain aversion to the idea that a perfectly good looking PFD might not actually work when push comes to shove.

My advice with your Mustangs is blow them up every three months orally and let them sit inflated for 24 hours as the yearly inspection simply does not cut it.

So, following that advice… 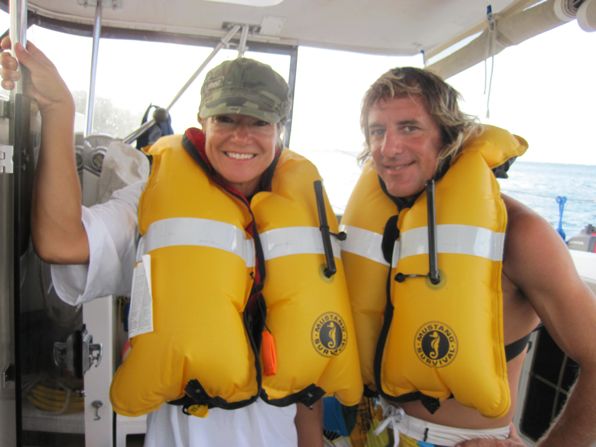 Yes, we got some strange looks, and comments, from our neighbors! 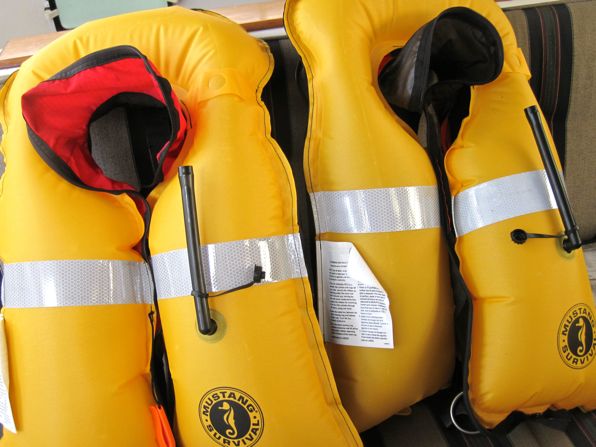 We inflated these and took the photos just before this was posted. I’ll post the photo tomorrow of what they look like after 24 hours.

Adding to our sailing resume

It IS most definitely worth it!