Another day that started off well

On the TV game show Who Wants to be a Millionaire, contestants are given the opportunity to phone a friend in order to obtain help in answering a question. Yesterday I would have given anything to have had that same chance, or even a decent internet connection to perhaps email a friend for help. Sadly, we had no phone, no Wi-Fi and no friends nearby that we could go to for help. In other words, we were on our own.

Much like the day prior, yesterday began on a positive note. Even though I was doubtful that I would find the part that we needed in stock here on the island, the Yamaha dealer just around the corner from where we were anchored came through for us. Not only did they have the water pump housing on their shelf, they were even selling it for basically the same price that you can pick it up for in the US. Surprised? We were!

The beginning stages of reassembling the engine went well enough but we hit a major sticking point near the finish line. I’ll describe it in a bit of detail in the off chance that someone reading this can steer us in the right direction before we get it sorted out. If you don’t care about the dirty technical bits, feel free to skip the next paragraph. 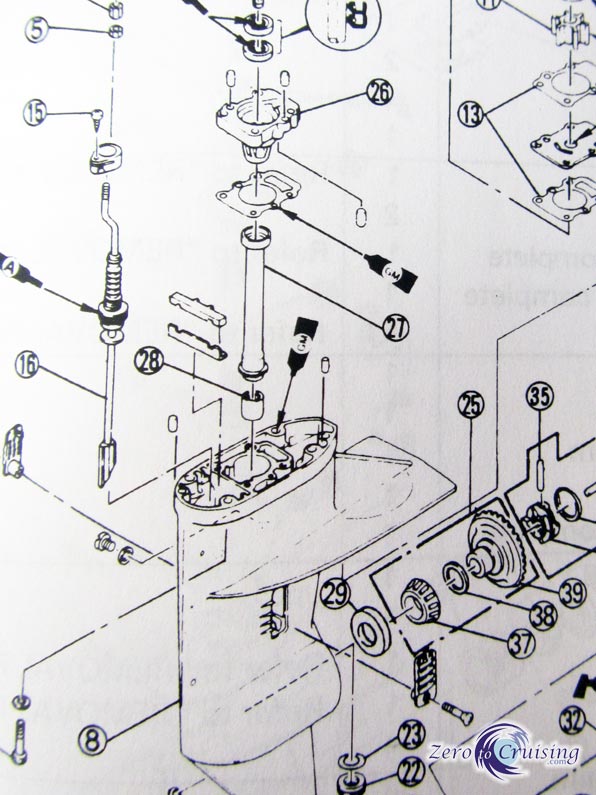 The problem arises when we try to get the lower unit reattached to the engine. We know that both the drive shaft and the tube running to the water pump need to mate properly in order for it to fit. As the service manual recommends, we have the engine in reverse so that when we start to get it together, we can attach the long nut onto the shift shaft. After doing that though, when we shove the lower unit the rest of the way on so that we can tighten the nuts securing it to the intermediate housing, the engine shifts into forward as the shift shaft pushes up. That doesn’t seem like a huge issue except that once together, we are unable to shift the engine out of forward, no matter how much we push on the shift lever inside the engine. I know that it is sometimes tough to move that little lever by hand but this is not tough, it’s impossible. I assume the shaft has to be in the correct spot because when we turn the prop, the flywheel spins. Where are we going wrong?

We spent a good part of the day trying to get the engine back in service. We even went to the trouble of putting it back into the well one time to check to see if we could shift it with the cable. We had no such luck and were forced to take it back out again. We continued fighting with this until shortly after 2:00 PM when, knowing that we were not going to have the engine repaired in time for the 2:30 PM bridge opening, we decided that we needed to move the boat inside the lagoon with only one engine. Yeah, yeah, I know, monohulls do that all the time. I, however, am no longer a fan of bridge transits, even when everything is operating perfectly. Why move at all then? Take a look at the swell which is due to begin today. Note that Marigot Bay, where we were anchored, is totally exposed to the north. 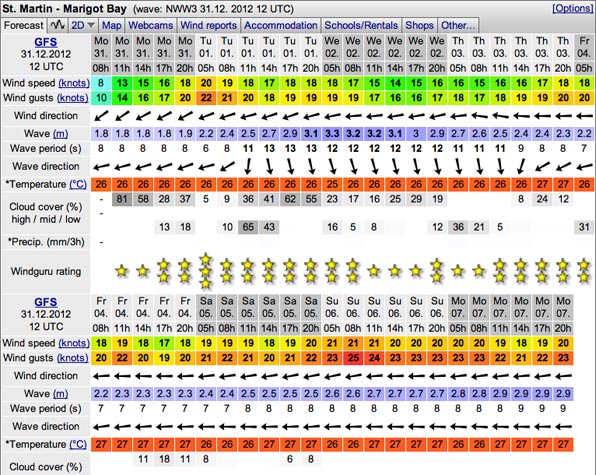 Fortunately, 2012 did not end with a bang, or at least, not one caused by our boat running into a bridge. Moving the boat was pretty uneventful and we’re now safely anchored in a spot protected from the coming weather. Hopefully everyone had a pleasant evening last night and is ready to have a memorable new year. I know we are!

Since writing the above we have come up with a hypothesis. I think that when we took the engine out and the lower unit off, it was in forward gear. We can not attach the shift shaft unless it is in reverse though. In my mind this means that we need to somehow push the shift shaft down into the lower unit, changing it into reverse gear, but it doesn’t seem to want to go. Suggestions?