The animal conflict was not lost on me

Surprisingly, my post about our attempting to save the goat that was attacked by the dogs brought out a number of negative comments, both here, and on Facebook. I have to say, I was surprised, and that doesn’t happen often. I can usually predict the response to my posts, especially if they are provocative. It just goes to prove, once again, how different people are.

As I noted in one of my replies on the post, it’s just in my nature to help.

We didn’t hesitate [to intervene], that’s the point. I would have done the same for a goat, dog, cat, bird or a person. It’s just my nature, and I’d do it again.

Responding to my comment that I will measure people by how they treat animals, one of the guys on Facebook, no doubt believing that he was being clever, decided to share a photo of me posing with a fish that I had caught. This was apparently intended to imply that I too mistreated, or didn’t care about animals. The truth is though, that conflict had not been lost on me, and in fact, the posting of such pics is something that I have been deliberating about for some time, but have yet to write about.

Now that the subject has been raised though, I’ll go ahead. To start, I don’t think that I have too many friends who are supportive of people posing for pictures with animals that they have just killed, especially those animals that are considered endangered. No one seems to take offense to posts with dead fish though, and that seems somewhat contradictory to me. A thorough search of our blog will net several photos where I have done just that, posed with our most recent catch. I’ve come to believe that such pics are inappropriate though, and I doubt that I’ll post any more in the future. 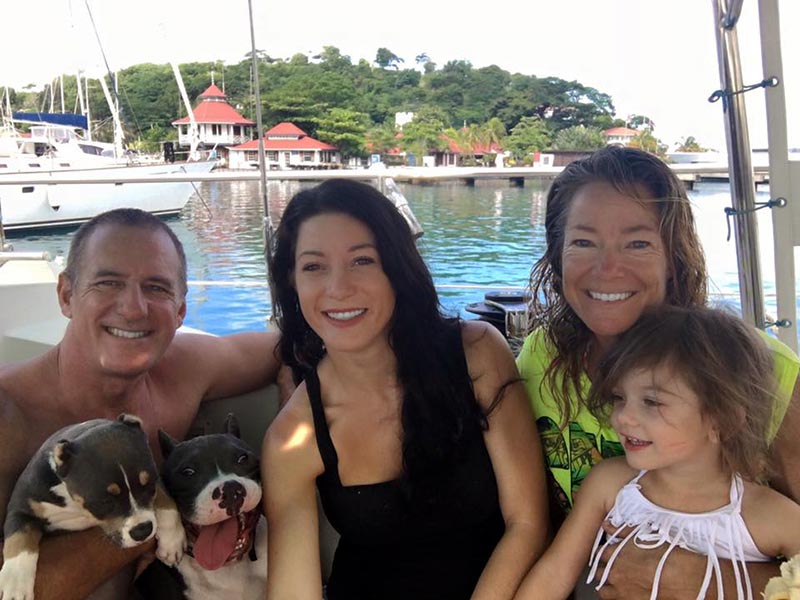 Our daughter and granddaughter visited us one year ago. As you can see, animals love me! 🙂

For the record, no, I’m not a vegetarian. I am also not against hunting for food, and that includes fishing. I understand that many people may have differing opinions about what is appropriate. All each of us can do is follow our heart.

In follow-up to the goat incident, a veteranarian friend of ours told me last night that the goats we see roaming around are more than likely not wild as I had assumed. They are, quite probably, someone’s livestock. She also said that dogs killing goats is a very serious thing here. Sadly, when we were at Clark’s Court Bay Boatyard two days ago, one of our friends witnessed another goat being pulled into the woods by a couple of dogs, high up on the hillside. Not good!

Held captive by the tide