That’s what our friend Jeff called our inability to start our dinghy’s outboard engine, an opportunity to learn how to troubleshoot and fix an outboard, without needing to get it done to outrun some storm.

To back up a step, we were inspired by this post about checking your systems before you need them and thought that it would be a very good idea to do that with our dinghy engine. And it’s a good thing that we did!

When we first dropped the dinghy down into the water and attempted to start our virtually new Tohatsu outboard, we couldn’t even get the starter cord to pull. I employed my standard troubleshooting method which I use in situations like this which is to stare at the non-working item for a while and then try the same thing over again. As it typically does, we got the same result. 🙁 With a bit of tweaking by a friend of ours, we were finally able to at least get the cord to pull. Would it start? Of course not. That would make a fairly boring blog post, wouldn’t it?

We noticed at this point a bit of oil/gas in the water (sorry Hub!) and it was suggested that perhaps our lower unit was leaking oil. We promptly raised the motor back out of the water and made plans to change the oil the next day. It’s always fun wrestling the engine on and off the dinghy but we got it done and dragged the engine out to the parking lot and onto a saw horse. We have the drill for changing the lower unit oil down pretty good now after having done it a couple times with the Yamahas. After going to that trouble I don’t think there was anything wrong with the oil but it is still good for peace of mind. 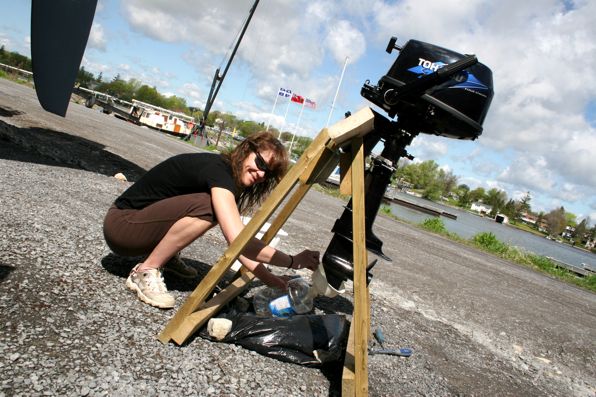 Not a drop of oil was spilled!

So, back on the boat goes the engine and more starting attempts, sadly netting the same non-starting result.

We ran out of time and patience that day but our next troubleshooting step will be to check that we are getting spark from the spark plug. If we are, that leads us to fuel, which I think could be the problem. Yes, we left fuel in the fuel tank over the winter, without adding stabilizer. I thought that because we were storing it inside that the fuel wouldn’t break down but apparently this isn’t really the case. So we might just need to remove the carburetor and clean it, assuming that it is now all gummed up with “varnish.” As I said, what a great opportunity! 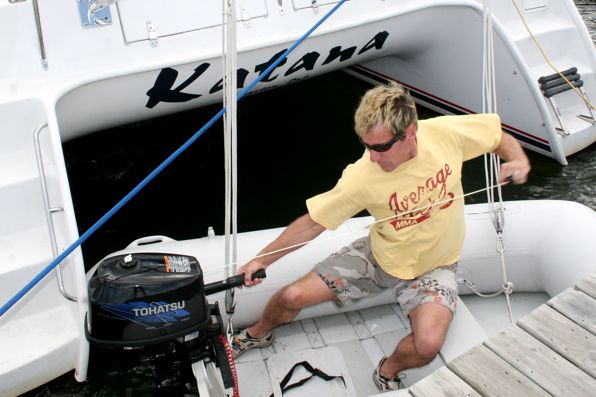 It looks like I am doing some Karate move in this pic!

Enough of the romantic BS!

The start of a busy year