Alcohol. I’m not sure how long it’s been a huge part of the cruising lifestyle but it is in no way a new addition. You’ve probably heard that sailors of old were given daily rations of Grog or other alcoholic beverages, and virtually any movie filmed on or around the sea will show significant quantities of rum being consumed. This is not just old news though. Much like our land-based social scene, alcohol continues to be an almost integral part of cruising. The proverbial sundowners which sailors reverently speak of enjoying in their cockpits do not typically refer to lemonade or iced tea. No, although not regulated like the Grog rations of days past, the consumption of alcoholic beverages is, for most cruisers, a daily occurrence.

Almost a year ago I wrote about the subject of alcohol abuse. That problem is no less evident this year. Fortunately there is an AA group which has been meeting here weekly so hopefully some of those who need help are able to get it.

Additionally, some comments on that post voiced concerns about not fitting in because of abstaining from alcohol. Well, purely for health and fitness reasons, beginning on September 11th, Rebecca and I decided to take a 1-month hiatus from alcohol. It just so happens that the three nights immediately following that decision we attended a going-away party at a marina, a beach get-together and then just last night, a trip with some friends to the Fish Friday festival in Guoyave. At each of these events alcohol was consumed by our friends. In spite of that, Rebecca and I opted to stick with Ting or other non-alcoholic beverages. The concerns about being shunned for not imbibing can obviously be put to rest both by our own recent example and by that of our friends who do not consume any alcohol at all.

As any reader of this blog can ascertain from my photos and entertainment descriptions, Rebecca and I love to party. And in most cases this includes alcohol. Although we do not typically drink to the point of intoxication, in certain situations, it has been known to happen. 😉 I point this out as evidence that this post is not to pass judgement on those (of us) who drink. Rather I’m simply making some observations. Oh, and where are we going later today? It’s Saturday, so to a Hash of course. For those who haven’t yet heard, a bit of beer consumption has been known to occur before, during and after the Hashes. True to our goal though, we’ll be sticking to water and Ting, and I guarantee it will not affect the amount of fun that we’ll have. 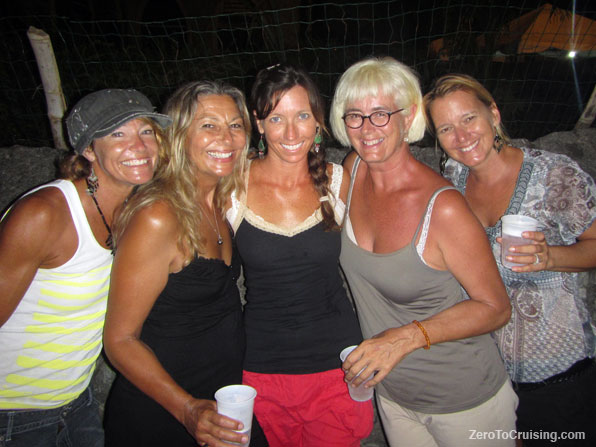 The girls in our group at Guoyave last evening.

Merry Christmas from the family

The Carenage: Prettiest harbor in the Caribbean?