As I mentioned in the rainforest post, our friends on Ainulindale had planned to be off their boat yesterday on an island tour. As we knew they’d be gone for most of the day, and Rebecca and I hadn’t planned on straying too far, we told them that we’d keep an eye on their boat, just in case. They were a bit concerned that in some light and fluky winds, they might drift a bit too close to their new boat neighbor, our other friend Rick on s/v Sophisticated Lady. As it turned out, it was a good thing that we were nearby.

Just after lunch, Rebecca and I were busy on deck, putting ZTC’s sails up in anticipation of our moving her around to St. George’s on Saturday morning. While doing so, we watched a 54′ SeaRay (power boat) come into the bay and anchor just off the beach at Hog Island. The boat was loaded with kids and adults and with all the laughter, it was obvious that they were there for some type of celebration. This type of situation is nothing new for those of us anchored in Hog Island as that beach is a frequent stop for the day-charter boats.

At one point in the afternoon we noticed that the SeaRay had either raised their anchor, or were dragging. Initially we were unsure as to whether or not there was even anyone on the boat as all the “guests” were apparently having a great time on the beach, laughing and frolicking in the water. Although the wind was light at the time, the boat was slowly drifting, making it’s way directly towards both our friends’ boats, broadside. We watched the situation unfold and as the boats got closer and closer, we hailed Rick who presumably was on his boat (no response). We watched some more, waiting for the SeaRay to power away. When this failed to happen and the boat had drifted way too close, I jumped in our dinghy and raced over to Ainulindale, ready to have a confrontation with the SeaRay’s Captain for endangering our buddies’ boats. After quickly securing our dinghy to Ainulindale’s transom, knocking one of their solar lights off in the process (sorry, guys), I raced forward to the bow, ready to fend off the other boat if necessary. When I arrived there, the SeaRay’s Captain immediately explained that they needed some help. They had lost an engine and were unable to maneuver.

Pushing their boat with our tender as a tug would move a barge, I helped the Captain of the SeaRay steer his vessel away and between our friends’ boats. With Rick down below and Kirk and Donna away, few other people witnessed all that transpired. Once safely clear of the yachts, I ultimately helped him to position the boat in a suitable spot for re-anchoring and following that, even ran the Captain over to the adjacent bay so that he could purchase some more diesel fuel (was that the problem?).

The Captain of that boat turned out to be a very nice guy and he was extremely thankful for my help. He took down our telephone number and invited us to visit him and his wife at their home in Hope City.

After reflecting back on the situation, I felt bad for the way that I had mentally approached the situation. Instead of going over there, ready to have a confrontation, perhaps I should have instead went their first assuming that the boat was in trouble and needed some help? Has my attitude has been tainted by past experiences? Without a doubt. Regardless, I will endeavor to take a more positive approach in the future. 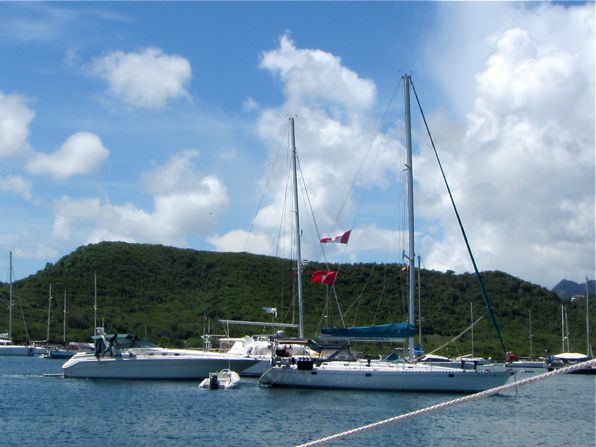 What you can’t see in this photo is that I am in our dinghy at the port bow of the SeaRay, pushing him away from Ainulindale.

Holes in the boat

It’s not only metal that gets rusty